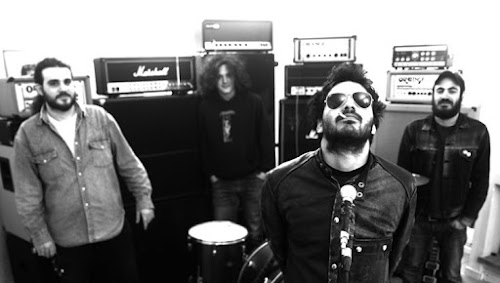 Among the gazillion comment sections where people argue about the case of 1000mods, a user was pointing out -in support of them- how the band has now traveled to the US and Latin America for concerts, something that no other Greek band has achieved and mainly it's what shows their success and quality as a group at the end of the day. This single comment can by extrapolation depict a pretty big chunk of the fanbase that annoys music purists or nerds, without this meaning that these people have any kind of jurisdiction on the scene's boundaries, norms or anything of the likes. However, it does describe the overall situation at least within the country, because I don't know how big or packed the following of 1000mods is outside Greece. The alternative youth glorifies them, the concerts are lit and the movement that started with them worked as a wave that carried fans who are actually into rock music, plus listeners without that background or passion for the growth of this specific musical field.

This situation creates a self-preserving loop of cause and effect that feeds itself, and expresses itself in almost any conversation about 1000Mods that includes a few scene kids and at least one person who feels more entitled. To be specific, some of the long time underground fans have either inner or outer complaints about the excessive exposure the band gets while being a bit hollow musically, and they tend to believe this view more and more when they see the band's directionless audience, which is in their minds a valid reason of the band's potentially negative mainstream nature. At the same time, the fans who have just gotten on this wagon the last few years have no clue of how have we arrived where we are now, were never into this music in the past, not in terms of taste but in terms of mentality, wouldn't get along with the stuck up purists mentioned before. The disagreement between these two groups relies on a set of arguments that all of us have heard again and again in the past, but what matters more, is 1000Mods a good band or not?

Going back to the initial comment, by having said the above, the average 1000Mods listener thinks it's the first band from the country to go to America? I'm sure Rotting Christ are already laughing, having toured to most of the corners of this Earth for thirty years now and even at a time when their music was a real counter-culture, not an overly more accessible and easy-listening sound that goes with the flow. Septic Flesh have done it as well. Not to mention -and I will get a little bit deeper now even though it's unnecessary- Varathron and Kawir, with the latter being inspired from their Latin America tour so much that they immediately composed and released an album after they got back. Heck, Barb Wire Dolls moved and stayed in Los Angeles, after being chosen by Lemmy himself, but I'm sure you already knew all that! Of course all these artists are not in the same sub-style but from a little far away, we can set similar standards for most of the Greek underground scene. Or, did this user mean “the first stoner band from Greece to tour abroad”, though I'm pretty sure it was not that but their ignorance.

As in the whole world, rock in Greece had some leaders each decade starting from the 70's, and possibly the 10's will be connected in the future with bands like 1000Mods. I first listened to them with their debut Super Van Vacation in 2011, I had mixed feelings and there was still no frenzy about them. Therefore, I had the chance to follow them as they released their following albums, as the fanbase grew and what it swallowed on the way. In retrospect, the band had tremendous potential from their very first steps, and they have never been the standard, boring stoner group. They have grabbed life by the balls, living the dream as a band especially with the recording of their last album Youth of Dissent, exactly in the eye of the storm: engineered / mixed by Matt Bayles (Isis, Mastodon, Russian Circles, Pelican) in Seattle.

For getting into the band, these are the albums you should be familiar with:

Before Super Van Vacation, 1000Mods had a handful of mini-releases, namely two EPs and a split with Wight from Germany, which also contained tracks from their second EP, and that was it. The material was more raw, with a semi-acceptable production, yet a lot of blistering moments in the songs. Going through 2006's Black Reality, you can tell how the band was still in its very first steps but listening to “Dope” or “Blank Reality” or “Boor” should give some hints of compositional mastery. Interesting, above average ideas, nice tempo changes, well written fuzzy stoner guitar melodies and a very accurate “desert” feeling. The sound was slightly improved for Liquid Sleep EP in 2009, with this era of the band being lesser known in general, as the big hit into the stoner scene happened after the iconic debut, and the growth into the worldwide alternative rock scene with their later albums Vultures in 2013 and Repeated Exposure To... in 2016. You can find nuances of grunge in these two EP releases, so their turn towards this direction with Youth of Dissent should not be a surprise as it is based very strongly on the same influences as the ones the band had since day 1 (except if you were also surprised when Darkthrone turned towards punk).

This sparked another series of new discussions on where is the band going next, how they abandoned the stoner sound into something more generic. Since Super Van Vacation is the album that created almost all the stoner backlash in Greece, they have been rigidly connected to the genre. It was inevitable for them to grow and after paying attention to the structure of their tracks, just a little bit more than nodding to the groovy riffs, you'll understand they were never purely “stoner rock”, but instead quite independent from the label. They are catchy, sometimes too catchy for their own good, but they are never dull. “Valley of Sand” from the EP with the same name, released in 2012, a seventeen minute, laid-back, spectacular track, showed how good they were in drawing in the listener. It's still one of my favorite tracks by them, or maybe the favorite.

There's a lot to absorb from their latest Youth of Dissent, especially when compared to previous material. It's not a perfect record. There are weak moments and weak tracks that feel like fillers. It made me wonder of their inspiration at times, but I am very glad for this release. 1000Mods are putting pressure of themselves and pushing forward. A few tracks are nothing less of amazing, and they maintain the same attitude as when they played for just a few people in 2011. When I purchased the Pearl Maxi Single, I just painted a picture of the distant future in my head, within the circles of record collector maniacs talking about rare side-releases of old classic albums and mentioning this very single. From a banging stoner tune like “7 Flies”, to a track like “Young” or “Mirrors” from them, it says a lot. Of course, “Pearl” is the album's absolute highlight in my opinion, but each one has their own. Surely part of their popularity comes from the overall positive trend towards stoner music the last decade, but this is not the only reason. I can think of many many worthless stoner bands, several from Greece. This one is indeed different.

All in all, I can't take a side in this debate. I don't care what other people listen to except if they ask me, but I have never felt shame for enjoying 1000Mods albums just because of so many “clueless” people like them. Frankly, saying you are into stoner in Greece most of the times means the holy triad of Nightstalker – Planet of Zeus – 1000Mods, which is a bit sad and funny, but not as pathetic as someone who would just shit on a person for not knowing better than that. For a band getting this big worldwide, 1000Mods would naturally receive some hate, but the points of view are all completely wrong, and their music not shallow. And if it seems like that, it's you who listened too quickly and moved on. Who's the music nerd now?