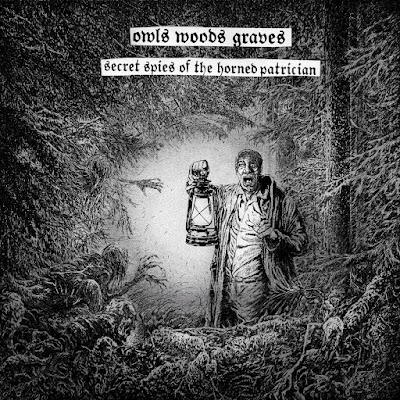 Band: Owls Woods Graves
Country: Poland
Album: Secret Spies of the Horned Patrician
Label: Malignant Voices
Website: Facebook
Punk and black metal are often fused together, often from underground bands with battered production and short duration releases in their ballpark. From my perception, the two genres part ways on a first level the cleaner the sound gets, but black metal has always had punk elements even if its most basic forms, while the same doesn't hold vice versa. Owls Woods Graves' debut Citizenship of the Abyss, released in 2019, was a tango between these two genres with rather distinct changes from one another throughout the album, co-existing but not mixing into one solution, and it was a banger. They were not afraid to to employ some tremolo picking, nice clean vocals, typical punk lines, and all in all, biting and energetic tracks with nice transitions.
Another notable point to mention is the choice of aesthetics, which uses fantastically drawn black and white designs (courtesy of Robert A. von Ritter), with typical Old English inspired fonts on white worn out frames for the album title and band name. Now, again I sense this is like a combination of the old school, DIY black metal / punk approach for text on a cover, combined with a well-made and catered design instead, e.g. of an out of sorts photo collage. It was like that for their debut, and it's the same with Owls Woods Graves' second installment, Secret Spies of the Horned Patrician. These two covers alone can make me buy the albums in physical format just for their grimy beauty and it was certainly a good sign when I saw the news of a new Owls Woods Graves release, a band that is unlikely to show signs of divergence because they don't really have to compromise their sound for anyone.
Secret Spies of the Horned Patrician has a distinct difference compared to its predecessor, even though it's not such a surprising turnaround. M., frontman of compatriots Mgła, is now handling the bass and some vocals in Owls Woods Graves, along with already existing members E.V.T. and The Fall, and once again the record has been recorded / mixed / mastered with the help of Mgła, as they are all related to and around of a common suspect label like Malignant Voices. Once listening to it, one can definitely identify M.'s touches to the vocal work of Secret Spies of the Horned Patrician, which has now taken a slight turn towards black metal more than the punkish debut. Nevertheless, both elements are present and vibrant in this album.
Immediate nodding begins after a few distressed second introduction of the first track "The Entity", which hits hard and already shows the band playing slightly heavier than in Citizenship of the Abyss. Atmosphere and riffs are filthy, the sound is pleasant and it's an excellent opener to set the engine working for the band, which had me childishly celebrating about what I'm about to listen just from the first seconds of Secret Spies of the Horned Patrician. The album proves to have a marvelous flow between its tracks, which contain several nice twists and turns around the main genre structures that we would expect, and that's what makes it more interesting for me than the average black punk album I come across today. Much like in the movies, it's often anticlimactic to be able to predict a whole record by not even listening to it.
Distinct punk patterns emerge in pieces like "Bats in the Belfry", "Return of Satan", and "Antichristian Hooligan", which also feature chanting chorus singing that has been prominent in the genre since its beginnings. From these tracks, I thought "Antichristian Hooligan" to be the least compelling for me, but "Return of Satan" is pretty heavy and not limited solely to punk in its content. Owls Woods Graves now have song numbers in the mother tongue as well, with "Idzie Diabeł" (=here comes the devil) seeing the band playing more in middle-slow paced tempos and the final "Zobaczysz" (=you will see) giving a a dismal closure to the record.
Secret Spies of the Horned Patrician is not limited there. One of the most exciting moments in the album is the short but fierce "Rabies", a track straight from a war metal course book, which is also accurately placed third and makes an excellent case after the first two songs. And then, the black metal flavors are a bit scattered throughout the whole work, yet at "Obscure Monastery" and "At the Crossroads", melodic guitar lines would strongly remind of other current black metal bands of the Polish scene. Vocals and bass sound amazing in Secret Spies of the Horned Patrician, yet I would have preferred slightly more engaging drumming in the less cogent moments of the record, but that's not that much of a big issue in the end.
Owls Woods Graves pick up a genre combination that can be tormented with stagnation from its very definition, and manages to make an album that is a hell of a listen, and maybe even better than their previous work. I think I prefer some aspects of the debut more, like the textual work, but I'm glad they continue with the same cover art philosophy, and compose tracks that are not purely punk, not purely black metal, but something in between with a distinct touch of the musicians involved and the surprise egg that was "Rabies" for me. I could listen to a whole Owls Woods Graves release with tracks like that. All in all, listen to Secret Spies of the Patrician today.
Release date: January 25th, 2022
Tracklist:
1. The Entity
2. Return of Satan
3. Rabies
4. Obscure Monastery
5. Idzie Diabeł
6. Bats in the Belfry
7. Antichristian Hooligan
8. At the Crossroads
9. Zobaczysz
Listen:
Youtube | Bandcamp
By VJ-atyc at January 29, 2022 1 comment:
Email ThisBlogThis!Share to TwitterShare to FacebookShare to Pinterest
Labels: 2022, Black Metal, Owls Woods Graves, Poland, Punk 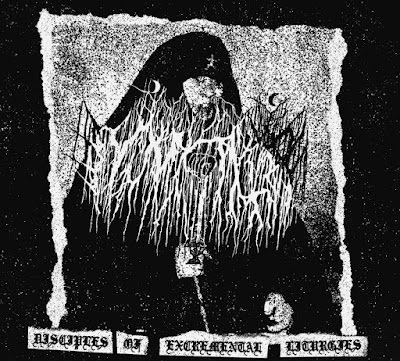 Band: Μνήμα
Country: Greece
Album: Disciples of Excremental Liturgies
Label: Phantom Lure
Website: Instagram
It's high time we had a conversation about this prolific project from Athens, Greece, which I have not really talked about since their inception in 2017, despite all the mini-releases they have put out so far. Μνήμα (Greek for "tomb") fall into the category of black metal with considerable leanings towards noise and sound distortion, in the broad family of bands like Candelabrum, Black Cilice or Obskuritatem, aiming for recordings as uncomfortable and harsh as possible, and they have been doing so since their first, self-titled demo. One could think that Μνήμα didn't have the intention to release a full length, judging from the persistence on putting out demos and splits, yet it's almost after 20 mini-releases that we arrive to Disciples of Excremental Liturgies.
This record blooms on reverb, acerbity and disgust. For the untrained ear, an album like that will not survive much when it kicks in after a short instrumental introduction (this and the outro, performed by Spider God) with the enormous piece "Cosmic Lunacy", which climbs up to 12 minutes of duration. Μνήμα were never an easy listening project and the same tradition is continues with Disciples of Excremental Liturgies, yet one can identify distinct changes in the musical approach if one manages to filter out part of the noise and focuses on the compositional groundwork. From that perspective, Μνήμα's chaotic element is maintained but we are now presented with moments significantly more melodic than what they have been used to do so far, and don't let that word fool you into thinking the project has gone any softer.
Listening to Disciples of Excremental Liturgies, apart from the distinct raw black metal routines, there's a serious Finnish / Greek black metal influence on the guitar riffs of the tracks. "Cosmic Lunacy" basically fully consists of such riffs, which are usually heard with much clearer production from other bands, but the essence is reminiscent, and that's even more obvious with the opening melodies of the self-titled track. I particularly liked the dismal lines at the ending part of "Cosmic Lunacy", where Μνήμα almost hinges towards more experimental playing for a second. There are already plenty of painful fast & middle paced moments in these two tracks, establishing the band's scourging sound.
Another highlight and noticeable aspect of this work is the unmistakable vocals. While going with screeched out, tense shrieked vocals all the time, at times an echo is employed and the voice goes at even higher volumes in the mix, making it truly deafening and ugly. It gives the feel of the vocalist trying to forcefully vomit somewhere (even though if you're a fan of the band, you know where), and there's also times of semi-gargling sounds that are aimed to convey the message of hatefulness Μνήμα is full of. Of course everything is unfathomable and I have no idea of the lyrics, I think I could tell the opening of "Νεκροσάβανο" (fabric used to cover a deceased person's body in the grave), where he goes "Γιατί δε...." and then mayhem.
Regardless of the blistering cruelty in Disciples of Excremental Liturgies, I would say it's the least noisy release Μνήμα has put out so far. Melodies are distinct, some tracks are not as hard hitting as in the past (listen to Spectres of Oblivion and you'll see) but I wouldn't say it's an easy listening album by any means. Hints of melodic aptitude were present before as well, if you listen to their wonderful demo Possessed Templars, released 2 years ago, yet with the debut full length I feel like Μνήμα aim to establish an anchor to their discography as one full work to suggest to someone. Obsessed with death and the human ceremonies around them, in a vile and blasphemous manner, but really raw, Μνήμα is definitely one of the upcoming raw black metal bands to look out for. A second full length is in the works apparently, so let's see how things evolve from here. 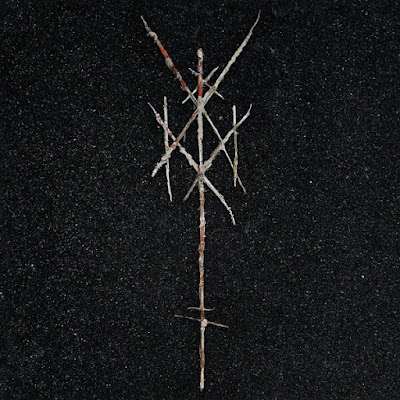 Notes on: Thy Serpent 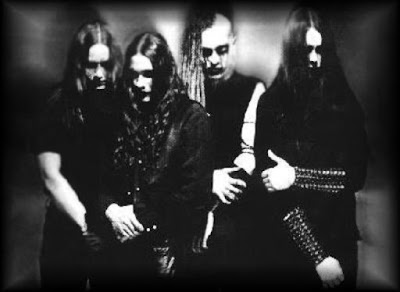 As stars have come old

Finland has always had a certain affection towards raw, blasphemous black metal, from its early days until today. Bands like Archgoat, Barathrum, Beherit and Impaled Nazarene were central protagonists during the second wave in the 90's, and a generation of new bands of the same origins has surfaced the last couple of decades, making their branch of the genre an equivalent of the drunkard uncle that crushes and ruins the Christmas family dinner. Of course, artists from there are also capable of delicate, beautiful music (all the symphonic black metal, melodic death metal, symphonic metal and rock, with bands of global caliber) and is one of the areas with the richest heavy metal culture on the planet.