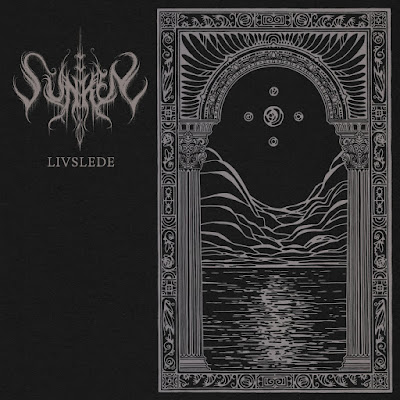 Funnily enough, I remembered that Sunken were preparing a second album about a month ago when I was browsing through a record store in a city near here and found not their debut Departure, but their first demo The Crackling of Embers, originally released independently in 2013 but re-released through Vendetta Records on vinyl in 2018. The Danish band have already come a long way and left a deep mark in 2017 with Departure, which might have not get the exposure it deserved but still featured some of the best atmospheric black metal of the recent years.
A turn has been taken to their native tongue with Livslede compared to their first full length album, which also has a elegant, beautiful cover that has been drained of all color. This goes along with the conceptual approach of the record, which paints a picture about the world that is rather helpless and desperate, often making references to the natural elements (storms, the vast sea) to correlate with living life. In these bleak lyrics, it feels like the protagonist is not trying to avoid the suffering but find the meaning in going through it, while contemplating death as the final cleansing towards peace of mind.
Musically, Sunken hit hard and at the same levels as with Departure, with a marvellous sound that efficiently combines potent atmospheric black metal and elements of post-rock / post-metal, the latter being more obvious in the track "Delirium" and the second part of "Foragt". There, the band has created a small partition to Livslede that slightly strays from the more direct black metal sound they have in the rest of the album, but this will most likely go unnoticed due to the overall fantastic flow. The production is clear and apart from the long guitar lines, aching vocals and synths, credit ought to be given to the audible and neat bass work.
Since I rarely find merit in such instrumental introductions to such records, I skip them more often that I would like. Not the case with Livslede, as the touching introduction "Forlist" with deep, echoing piano opens the album, immediately setting the stage and hooking up the listener, it properly directs the attention to what Sunken is about to present and works exactly as what an introduction piece should. Of course, it gives way to the album's highlight "Ensomhed", which shoots all that Sunken can do in top-notch fashion, and it there's one piece you have to listen to from Livslede, this is it.

"Dødslængsel" is as capable of closing the record as was the "Forlist" of opening it, swinging back and forth from middle-paced thrilling melodies to fast-paced atmospheric black metal, and ending with a melancholic clean guitar / ambient outro. It's now two quality albums in a row for Sunken, which should make the fans of atmospheric black metal keep and note and look out of this band's movements from now on. Livslede is a well-written and emotional album, without falling in the disease of being corny, as sadly several bands in this sub-genre of black metal.

Panzerfaust - The Suns of Perdition - Chapter II: Render Unto Eden 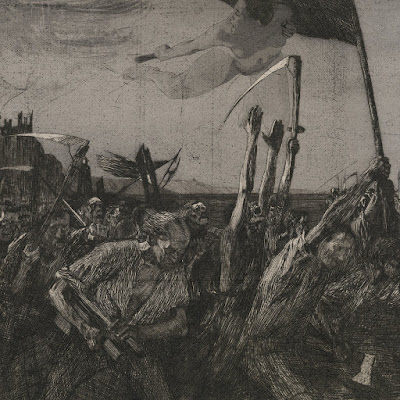 Last year, I had almost skipped Panzerfaust's Chapter I: War, Horrid War. When I finally listened to it, it didn't take me that much time to place it among the albums to return to for the rest of the year, and until now. A band completely unknown to me with a long history starting from the early 00's, which lived through a very obvious change in their path by releasing War, Horrid War in 2019, which lifted them from the average underground corridors of extreme metal to the high peaks of artists to constantly keep an eye out. Momentum has now been growing even more, with the second chapter in this concept tetralogy, Render Unto Eden, attracting the attention of an even bigger portion of the scene. And it's by no mistake.
From all the war-themed metal albums in the world, how many would you tell manage to convey the message and provoke the feeling adequately enough to avoid being crushed by their own pretension? The atmosphere Panzerfaust construct is unique, and with subtle compositional fixes show how well they know how to play and what they're doing. By nature, Render Unto Eden has space for interpretation (compared to a more direct War, Horrid War in my point of view) and has been improved in terms of musicianship, production and mainly, flow. The band masterfully builds the album's intense moments, maintains a dim, menacing character throughout the listen, having placed together five tracks that go along in absolute brilliance.
While the sound is very characteristic of them by now, slight traces of other famous bands of our time can be found in sparse riffing and the more general approach of their aesthetics. Mgła influences can be found in some potent guitar melodies of "The Faustian Pact" (and the stunning structure of this song), but more clearly in "The Snare of the Fowler", just by listening to the drumming session in the middle of the track and on. In Render Unto Eden, the guitar lines have grown, the bass work is impressive and should not be overlooked, drumming is on point, and the depth of the compositions certainly surpasses its predecessor.
Apart from Arkona's Maria Arkhipova, who is featured and contributes to a breathtaking part of the introduction track "Promethean Fire", I also adore the chosen cover for Render Unto Eden, which could be taken from the works of Käthe Kollwitz and specifically The March of the Weavers in Berlin, one of her more popular pieces. Other than the fine aesthetics, "Areopagitica" is the total banger of the record, deserving to get higher exposure, as it is addictive from the first seconds and quite memorable. I think all five tunes are of high quality, but only once the listener invests into the band's world. The closing of Render Unto Eden with "Pascal's Wager" is plain melancholic, offers a smooth transition back to reality and makes up for this hell of a listening experience.
There is backstory to the tracks and the complexity of the album is not so much in terms of technicality but more in the level these musicians understand what they want to write in their music. In my opinion, it's really hard to achieve this and shows endless compositional potential. I know for a fact that the band can be mistaken for nothing special as I almost was in that loop once, yet Render Unto Eden can make a lot of extreme metal records obsolete, and it just makes me wonder how will the next two albums look like in this story. Until then, listen to Panzerfaust and listen to this, but as a whole.
at September 24, 2020 No comments:
Email ThisBlogThis!Share to TwitterShare to FacebookShare to Pinterest
Labels: Black Metal, Panzefaust
Newer Posts Older Posts Home
Subscribe to: Posts (Atom)