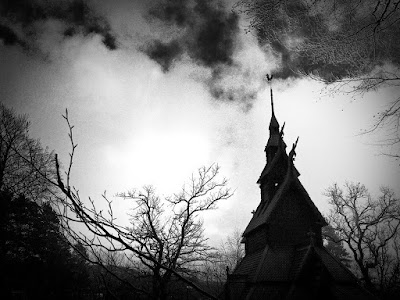 I would usually make an album list for this but for once, I chose specific favorite tracks to support the case instead of whole records. I try to maintain one track by each band when it's not a specific band's playlist, which means of course I have more tracks but the artists I like that I didn't use here. Many of them are personal choices of some of my favorite tunes, so if anything's missing, it's not that I might have ignored or overseen it. I wanted to create a Spotify playlist but some tracks were missing so I decided just to list Youtube links to each track, for anyone to have a quick listen. I have a second part of a similar playlist and then a third installment for bands active after 2000, I don't know when I will write things up about them in the future though.

1. Hades - Alone Walkyng (listen)
I dig their material under the name Hades Almighty less, but it's not like I dislike them though. Their 90's releases are all amazing and I still remember the first time I listened to this band, when I first started discovering the beauty of the Norwegian scene beyond its most famous bands. Chilling vocals + great introduction + middle tempo does the job. You should listen to both their 1994 and 1997 albums. (from The Dawn of the Dying Sun, 1997)

2. Mayhem - Buried By Time and Dust (listen)
There is nothing left to be said about the most iconic black metal album of all time and there needs to be no addition about it either. I like "Buried By Time and Dust" because of the riff that goes on somewhere a minute and a half in it, and I have liked it as much as I has been reproduced by all the bands in the world since. Every single note in this record is history. (from De Mysteriis Dom Sathanas, 1994)

3. Keep of Kalessin - Den Siste Krig (listen)
A classic example of a band that musically died after the change of the millenium (my theory is that their early albums' brilliancy comes from their frontman Ghâsh until 2000). Nevertheless, their debut is a magnificent album and one of my most listened ones ever, as it was also one that I had randomly bought because of the cover very early into my descent to the genre. "Den Siste Krig" is a really intimidating track with everything I love to listen in black metal. (from Through Times of War, 1997)

4. Dødheimsgard - Starcave, Depths and Chained (listen)
I am a fan of all the albums by Dødheimsgard, but I appreciate them at different levels. They have changed significantly since the nineties but that's totally understandable for a band like that, and their latest offering are all smart and interesting. The truth is I mostly listen to Kronet Till Konge, Monumental Possesion (which I consider perfect) and the Satanic Art EP when I decide to go down on DHG. It's all a matter of taste and I don't really know why I chose this track over the rest. Fenriz playing bass here is just another little treat. (from Kronet Til Konge, 1995)

5. Det Hedenske Folk - True Northern (listen)
This is a relatively recent discovery, or more correctly, one of the last discoveries I had. A short lived band with ties to Old Funeral and Abbath, I really enjoy the self titled EP, its cover and its music. (from Det Hedenske Folk EP, 1996)

6. Kampfar - Troll, Død Og Trolldom (listen)
I don't know why Kampfar are not discussed more, they have brilliant guitar lines in their tracks, a very distinctive sound and they have been on the rise again the recent years after a couple of bumps. I was stunned with what went on after 2:30 in this track, as well as the quality of the whole album and I recommend it very quickly, after the basics, to anyone getting into the music. (from Fra underverdenen, 1999)

7. Darkthrone - Natassja in Eternal Sleep (listen)
This is the same case as Mayhem before and I have no comments for this landmark track / album / band. (from Under a Funeral Moon, 1993)

8. Bak De Syv Fjell - From Haavardstun (listen)
This is purely in clean vocals but quite black metal in spirit. The singing here is majestic, magical and reaches the level of the cleans of the Ulver debut, which is a pretty high mountain peak for anyone to be at. I was happy to find out that Einar Selvik (who I know from Wardruna) played drums here. I also have this on CD and I replayed several times after the first listen back in the day. (from From Haavardstun EP, 1997)

9. Manes - Til Kongens Grav De Døde Vandrer (listen)
This is one of the most unique and forward thinking albums in the genre and it stands alone, further away from everyone else. The compositions are insane as are Manes themselves, who I still like to listen to today despite their change to trip-hop / electronic directions. Records like these are the proof of how dominant the Norwegian scene has been for the 90's. I'm not ashamed to say that the the last two minutes in this track get me wet easily. (from Under ein blodraud maane, 1999)

10. Burzum - Ea, Lord of the Depths (listen)
If you are at this point in this blog, it is impossible not to know this. Among Varg's albums, his debut is not the best but it is my personal favorite by far and it scarred my younger self with the love and the fanatism about the genre. Choosing one the most popular tracks is because I'm mainstream. (from Burzum, 1992)

11. Kvist - Vettenetter (listen)
I would put this album above Filosofem for the year of 1996, so this should be enough information of how FUCKING AMAZING it is. There is nothing wrong with Kvist's debut and only album, their obscure presence in the scene only adding to the flavor. The aesthetics, the music, the vocals here, all perfect. (from For Kunsten Maa Vi Evig Vike, 1996)

13. Thorns - Funeral Marches to the Grave (listen)
In its own way, it contains the music's most vital ingredients in perfect balance. Marvelous. (from Trøndertun demo, 1992)

14. Aura Noir - Released Damnation (listen)
I hadn't realised for a long time how good the early Aura Noir material are, as I was stuck to Hades Rise pretty much all the time. It turns out Deep Tracts of Hell is not only their best but an overall raw, intense and fairly complicated album. Some of the riffs and solos here are unbelievable. A few are featured in "Released Damnation". (from Deep Tracts of Hell, 1998)

15. Immortal - The Sun No Longer Rises (listen)
Pure Holocaust and At the Heart of Winter are the only flawless Immortal albums in my opinion. I had a hard time picking between this and "Unsilent Storms in the North", my two favorite tracks from the album, but this also depicts the speed and the grimness (a word that has never been used more accurately for any other band). (from Pure Holocaust, 1993)

16. Strid - End of Life (listen)
You have to be a sane person in this world to believe that Strid's material are the first DSBM recordings ever. How diverse and influential the Norwegian bands have been to almost all black metal sub-genres of the later years is a topic for a different article, for this track I would say it's very compelling, with great changes and atmosphere. They never released a full length but their few releases are all wonderful. (from End of Life demo, 1993)
at June 15, 2018
Email ThisBlogThis!Share to TwitterShare to FacebookShare to Pinterest
Labels: Black Metal, Journal, Norway