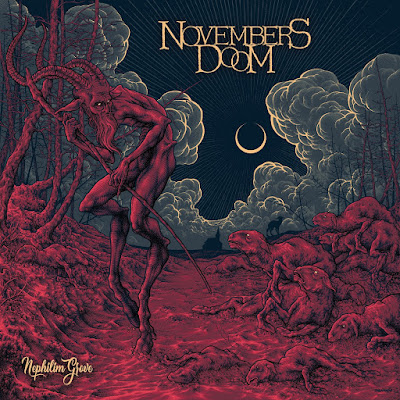 It's been a while since I sat down to listen to a Novembers Doom record, a band which I lost somewhere in 2009 after the engaging Into Night's Requiem Infernal, even though I occasionally run through pieces of their early discography. They were once of big admiration to me, daily listening to them along with early Swallow the Sun and trying to reach a conclusion on which group is the best. Of course, I appreciate both of them for different reasons, and these reasons are still floating with Novembers Doom latest, Nephilim Grove.

As a band that is used to write long albums, this one also holds something more than fifty minutes of duration, professionally produced to give it this spotless sound that corresponds just fine to the record's virtuality. Nephilim Grove has an abundance of melodic riffs, as well as parts of clean guitars, but it doesn't completely shy away from heavier moments and the usage of growls. In general, there are more clean vocal moments here than I remember Novembers Doom to have, but I was satisfied to listen to the whole range of Paul Kuhr's excellent vocals, a guy who I don't mind listening to all the time. It is a strong weapon that Novembers Doom have, and I don't have many vocalists of the "mellow" side of screaming that I like that much (Daniel Droste of Ahab is another example).

Of course, the lyrics are very easy to understand, which made me realize so unused to the concept of such clean vocals I am, when constantly listening to sharper black or death metal albums. Nephilim Grove is quite personal conceptually, in general narrating feelings of nostalgia and sadness after a loss, provoking a familiar negativity that fans should know about. The compositional structure is quite fluid, offering very entertaining guitar solos, switching between catchy choruses and a few more intense moments. I constantly felt like listening to some heavier Novembers Doom throughout the record though, because that's what I am as a person.

There's a slight usage of samples, and a few parts with keyboards, and I'm thankful they didn't let that blow out of proportion in the songs. One of the tracks that I would get back to after a few listens is "Black Light" for sure, exactly for its more brutal nature as was explained just before, where I got to listen some hard hitting with this singer's awesome growls. After that, the guitar work on "Still Wrath" is wonderful, and also the opening track "Petrichor" can be a good introduction to Nephilim Grove. At the same time, I was tempted to skip a couple of tunes just for some repetitive parts they had, mostly when the album turns too mild for my likes.

Nephilim Grove closes with a beautiful track "The Obelus", and leaves the listener with good impressions on the condition of the band this year. Novembers Doom have had their own sound for a long time now and this is another record where they showcase interesting ideas within the doom / death metal sector, almost adding some gothic nuances this time. I can't tell if I would pick it among my favorites this year but it wasn't a disappointment by any means.