I can’t be certain if this is the case, but I have a feeling Nocternity have always stood a bit further away from the rest of the Greek black metal scene, despite having a history of more than twenty years now and material since the late 90’s. Maybe it’s because of the fact that as a band, they don’t follow the standard recipe the country’s driven black metal style (not in music and also, not in the lyrics) that has been established since the second wave, but they drew their influences from other areas in more central and northern Europe, especially the Norwegian scene. The project is comprised mainly by Khal Drogo (who chose this nickname way before Game of Thrones came out on TV), and Merkaal, who has also been involved in Order of the Ebon Hand.

What appeals to me when it comes to Nocternity apart from the music is the grey aesthetics of all their albums, featuring photographs of the band members in medieval armour, that I think they make themselves. Through Kyrck Productions & Armour, their own label, chainmails are sold as well as a small variety of underground black metal albums, that they often treat in their own limited edition versions named “Dragonskin Edition”. These products look undeniably awesome like collectible jewels, and this whole approach is well-crafted and as far as I know, unique in the scene. The band doesn’t have a big discography for the years they have been active but this is, in their case, quite favorable. 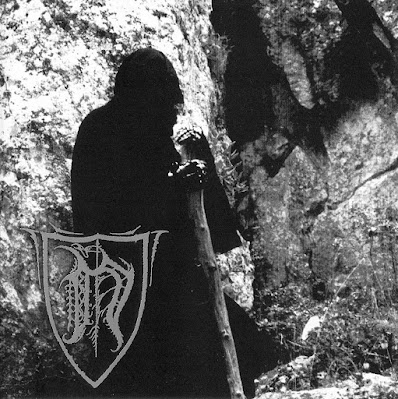 In 2001, Nocternity’s debut full length En Oria is released through ISO666 Records, and at the same year an EP named Crucify Him comes out under their own label. Both releases were actually promos from two years ago, that happened to be released that year, and the more complete way to listen to them is from the 2004 compilation by Solistitium Records, which contains both albums as well as two bonus tracks from a 1997 rehearsal. These two tracks are the earliest Nocternity recordings, as far as I know. En Oria contributes to a rather interesting listen, it is considerably atmospheric and dark, with a wide use of keyboards and a very beautiful concept described in the lyrics. Stories of underwater female entities tormenting sailors and seamen (the name Natassa is mentioned in one of the songs, as well as Umberlee The Bitch Queen, a sea goddess from Dungeons & Dragons), being narrated from the eyes of the protagonist, who concludes and meets his end at the last track of the album (before the outro) “Final Redemption”. The record’s dusty and warm sound helps En Oria’s flow, which doesn’t have groundbreaking moments but not underwhelming ones either. Highlights of the release can be heard in the well-written “The Drowning”, in the sorrowful ending of “Final Redemption” as well as the keyboard – guitar coordination in the second track, “To the Shrine”.

The EP Crucify Him follows a similar mindset, yet the keyboards are slightly more active and now there is a clearer reminiscence to early Norwegian symphonic black metal, with a more distinct distinction from En Oria being in the structures of the tracks themselves and how the clean guitar / key parts come and go in between the distorted guitar sections. Samples from fights are used in what is also the best track of the EP “Perdo Corporem”, the synthesizer introduction is not as interesting as the ones in En Oria and the lyrics are not at the same level as well, yet musically it’s a fine EP with good material from the band. Since these were composed temporally close to each other, the deviations are not that gross to begin with and as a whole, both these releases depict the sound of Nocternity at the time. 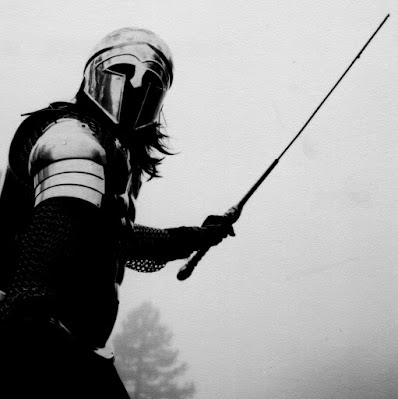 Onyx, released in 2003, is in many ways more consistent and binding than En Oria, as the slower-paced guitar lines that the band is masterful at are more eminent throughout the record. It is just with a few tools that Nocternity manages to win the attention and captivate the listener, particularly with long chilling melodies like in “Secret Aura (The Key)” or in “The Red Dawn”, but the intensity rises even more when they play faster in “Valyrian Steel (Blood of the Dragon)”, another neat reference to A Song of Ice and Fire, as well as the highlight track for me, “Onyx”. The record opens with a piece that is mostly instrumental, “Song of the Hammers”, guest vocals done by Therthonax from Kawir and drums by V.V of -later- Dead Congregation, who had also contributed his talents before in the Crucify Him EP. Apart from these feats, mastermind behind winter ambient project Vinterriket from Germany, Christoph Ziegler, also contributed with the instrumental outro for the album “Schwarze Nacht”, embracing the already imperious atmosphere of the album in an ideal manner.

One year later, A Fallen Unicorn was released, which featured songs that were created and recorded during the Onyx sessions, but didn’t actually land in the track list for the full length. The EP consists of five tracks, and what catches the eye is most notably the cover of Björk’s “Pagan Poetry”. Nocternity’s thrilling interpretation of the track makes me wish Björk herself would listen to it, and it’s not alienated from the rest of the material in this mini-release, but instead incorporated and fitting perfectly as the final song in it. A Fallen Unicorn also has some of my favorite tracks by the band, especially the self-titled track and “The Emerald Serpent Prince”, assisting the form of a certain image in my head on how isolationist black metal with a thick atmosphere should sound like (sharing similar feelings with Cornigr’s full length album). The distant vocals help a lot in this result, and it makes this EP a memorable release in Nocternity’s discography, despite not being a full album. 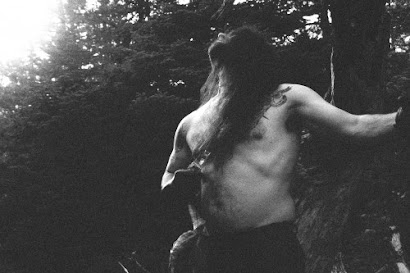 In between the first two albums and the EP that came later in 2004, Nocternity were featured in four split releases. The mini-album with Kawir in 2002 featured a version of the track “A Fallen Unicorn” with a different production, while the collaboration with Akitsa in the split Cold Wings of Noctisis in 2004 features two tracks that were originally recorded in 1998 (before the first promos) but were released in 2004 (Akitsa’s side was nevertheless written in 2004). Nocternity recorded new tracks for their sides with Morrigan in December 2004 (with the awesome track “The Iron Age”), as well as with the Swedish underground wolves Nåstrond. That split came out in 2005 and it could be considered the best among these four shorter chapters of the band, for the noisy, frosty riffs in “Times of Mist” are another highlight in their overall journey. 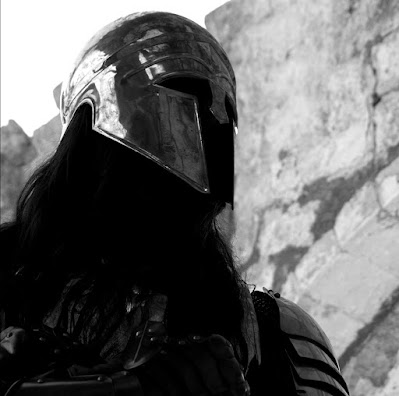 Harps of the Ancient Temples:

Taking a big time leap forward to 2015, means that the two EPs Harps of the Ancient Temples and Nocternity in 2007 and 2012 respectively, can be sidetracked to talk about Nocternity’s third and most complete album, which shares a title as an aforementioned EP, named Harps of the Ancient Temples. The previous two mini-albums served as a preparation for what was ultimately going to become a full length (but still, you have to listen to another really interesting cover of “Crystal Tears - End Titles” by Vangelis, released in 2007), which is leaps and bounds ahead of their previous material. And when I say complete, I feel Harps of the Ancient Temples is the absolute phenomenal Nocternity release that has filled this band’s purpose to the fullest, making me wonder if there is a point to release anything more or what could that be. It is interesting that Leviathan’s Scar Sighted came out the same year, which is the same kind of near-perfection installment for Wrest, not to mention what could be the best Greek black metal album of all time, Macabre Omen’s Gods of War – At War, comprising into the three releases that come to mind when thinking of the year of 2015 as a whole, at least now, after five years.

While Daemon (from Limbonic Art) is listed as the band’s vocalist, Lunar Aurora’s W.  did the vocals for Harps of the Ancient Temples, which could be a more reasonable choice since he sung for the 2007 EP with the same name as well. The record’s title comes from another time in the human mythos (in what could be a crazy Vangelis reference again, or an ode to the harpist Gail Laughton and his touching 1969 record) and I believe Nocternity have perfected their compositional skills without experimenting in any new direction. The mammoth pace is enforced by heavy, dim melodies that entwine the thread between music soundscape and listener, and frankly this album provokes more emotion than most more complex, cleaner sounding black metal albums of its time. In many ways, Harps of the Ancient Temples is a gem for the underground and doesn’t have a target group of the all evolving audience of that decade. The sound of the guitars is natural, the riffs are bone chilling in all of the tracks, the bass and drums are audible and healthy, hand in hand with the dreamy vocals that deliver an album that seems simple at first glance, yet I don’t think many bands can achieve it and claim this mountain top. What feels reserved and shy at first glance, actually evolves into an introspective journey with an all powerful grip that is strangely mesmerizing and addictive, as if the record follows the same process as meeting an introverted person in real life: it rewards the people who have the patience to give it time to open up and blossom.

It has always been Nocternity’s strong point to tell a good tale through the lyrics as well, and this is more than obvious in the texts of Harps of the Ancient Temples. Elements like atmosphere, monotony and flow are all used in the best way they can be possibly used in a black metal album. From the first to the last note, it speaks volumes of this band’s capabilities. Secretly, and ironically, it laughs at bigger labels that are mooching off the so-called “Greek black metal” franchise the last few years, with newcomer bands that replay and replay and replay the same elementary synth based heavy / black metal approach that made the country famous, but with absolutely no inspiration in what can be, in my opinion, very delicate and almost offensive fan service. Here is a record with real content, spirit, excellent lyrics, and above all, real feeling.

For a band to make the cut to the genre’s pantheon, the music is just one part of it. Nocternity have all it needs not only in the music section, but also the lyrical themes, their path the last twenty years, their wonderful aesthetics, their consistency (mostly in the purity of their intent, than the material in their records), all co-align to suggest this project as one of the highest order for Greece and not only. As I mentioned before, I sense they don’t get the praise they deserve, but it’s a criminal act to overlook this band completely. Even the comparisons with Norwegian bands is, to an extent, out of place, because they were never blind copy-cats. With just three albums, I have all I need from Nocternity and their music is a majesty, and that is why I haven’t minded their absence since Harps of the Ancient Temples. If anything is bound to come, it will come at the right moment, and until then, there's plenty to be enjoyed already.

Listen to Harps of the Ancient Temples: