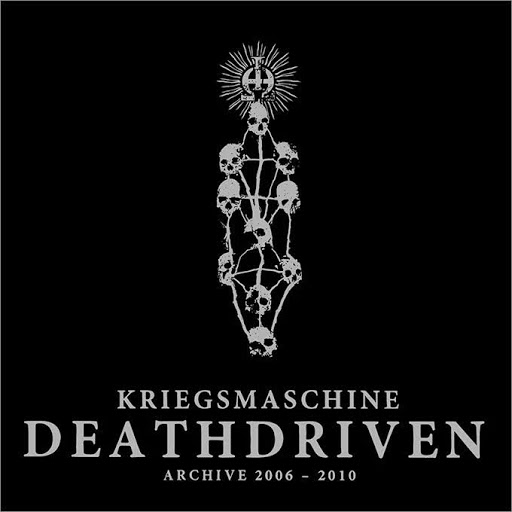 By releasing this compilation, Kriegsmaschine now have a really tidy discography: Prism: Archive 2002 - 2004, released in 2014, covers all their material prior to the debut Altered States of Divinity, this one covers the two splits they released in between the debut and Enemy of Man, and the rest are the infamous full lengths. Neither the split with Infernal War nor the split with Szron come quickly to mind when thinking of the band, especially when they have released such monstrous albums recently, yet the quality of the material is equally powerful and in a structural sense, even more approachable than the slow-paced yoke they enforce with what came afterwards. In this time period, Kriegsmaschine laid the foundation and were slowly taking form, before exploding with Enemy of Man in 2014, one of the best black metal albums of all time.

Deathdriven starts "backwards", as the first thing featured is the Transfigurations split that was originally released in 2010. Both tracks are massive, the guitar work is exceptional and the evoking atmosphere is naturally closer to what was composed for the full length that followed. These two pieces are hidden gems in the band's discography and they get along really well together, how one gives way to the next almost feels like it is one whole piece. "Onward Destrudo" has this KSM crushing tempo and quite memorable riffing here and there, while "Fear and Loathing in Gesthemane" can't help but make someone wonder where they thought of the title? Could be slight reference to the unconventional black comedy Fear and Loathing in Las Vegas, the eight minute song describes Christ's struggle from an absolutely human, regretting angle, but I think it doesn't really depict Kriegsmaschine's finest lyrical work. On the other hand, "Onward Destrudo" is perfect in all sections.
Following are the three tracks from the Szron split from 2006, and they lay in the same area as the material from the album they are closest to, Altered States of Divinity. The familiar, painful shouting vocals, along with chants, are present, at times the band goes full speed, which became sparser and sparser until it completely disappeared later on. This is an extra reason to listen to this compilation if you're a fan of the band mainly for the latest records. For example, parts of "E" as well as "The Fall in All its Glory" employ the traditional black metal framework of frenetic speed. The lyrics are nothing less than impressive and the talent of this band in general, gloriously shines through this release.
Sometimes compilations are void of meaning, but Deathdriven is a good opportunity for you to purchase and own this part of Kriegsmaschine's discography. The five tracks contained have been possibly left on the shelf due to the exposure the last two full lengths have gotten, but I don't see anything lesser here in terms of quality. A blast from the recent past to remind their audience of their early endeavors, and to never skip a mini-release. In my opinion, Deathdriven is totally worth it and makes up of a fine listen, something that is quite rare among compilations even from well-acclaimed bands.
Find it here: No Solace Store