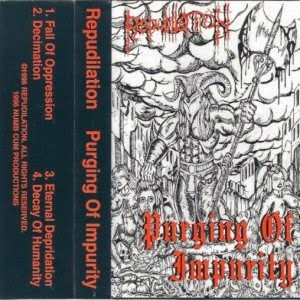 Repudilation were formed in 1994 as a brutal death metal outfit, back when the genre had not completely taken form. Still, their first and only demo Purging of Impurity in 1996 was close to it, at least musically, since the band didn't adopt the pure fun gore subjects of the later bands. Repudilation also released a split and a compilation before splitting up, which makes this an important part of their small discography.

This demo includes four tracks, all of them lasting around three or four minutes. The sound is quite noisy but not completely damaged so that it's unbearable, having a dirty production and a couple of samples to keep the entertainment going. The guitars have a thick catuous sound that creates the first layer of the recording and the drums go on nicely and accurately, with frequent blasts and fast parts.

A main characteristic of the demo is the gargling, guttural vocals of Rich Turnbull, which hardly even go into the typical growling moment. His singing is deep, grunting for the most part, making his style clear brutal death metal and of course indistinguishable. The performance is cool throughout the demo and has what is needed to support a groovy old school / brutal death compositional arrangemeny like this.

Since I have not found any lyrics available, from what I get through the various titles, the band revolved around decay, death of humanity and general macabre subjects. That fits fine to the death metal scene of it's time and the splatter lyrics / covers are amiss, as in the rest of brutal death. Yet, I think the black & white cover art of Purging of Impurity, along with the deep red letter, is great awesomeness.

During these fourteen minutes, I heard nothing but legit brutal death metal, budget limited to demo standards only, with an awesome "Dance motherfucker, dance" sample at the beginning of the last song. Lot's of slam elements exist in here, and judging from the chronology it's certainly one of the first records as well. As I'm not a die hard fan myself, I think it has it's stench and quality, so this is indeed a good demo.