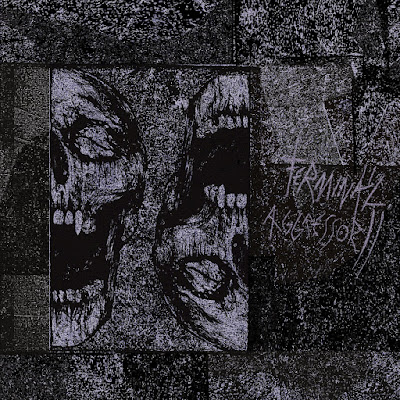 
Right when I was wondering about the Dragged Into Sunlight camp, since I re-listened their remarkable collaboration album with family friendly project Gnaw their Tongues, named NV from 2015, this mini release came out and had me thinking that probably it's part of a bigger record for later this year. Yet, it seems the band has reached an impasse with their label Prosthetic Records, who released this track behind their backs and the members themselves will not have any profit at all from it.

By ignoring this, the fans should still do the right thing and not buy the track from Bandcamp, instead find it elsewhere and just support them through their Gofundme page (link below). Apart from all that, we are now into half an hour of new Dragged Into Sunlight material, and judging by the length of their previous two releases, NV and WidowMaker, one might as well trick themselves into thinking that this is a full album.

Terminal Aggressor II is related to the band's first ever release from 10 years ago, which was also named Terminal Aggressor I and was in the same format of a single, long track. Their affiliations with noise have always been present in their discography, and that element doesn't shy away at all with Terminal Aggressor II, which could be based mostly on abrasive dark ambient / noise, than pure black metal. You will be treated with unsettling sounds, haunting samples, vocal screams and slow paced, painful parts that characterize Dragged Into Sunlight, well placed in a thirty minute tune that can be vaguely split in two fifteen minute sections.

Right around the fourteenth minute, and after a long multi-layered session of noise practicing, a drum tempo starts building up that gives way to the black metal part of the song. The vocals are tormenting and the guitar lines simple but effective, it doesn't increase speed at any point and generally presents a more meditative, noisy structure that gives out a listen quite far from comfortable. However, from what I believe the potential of Dragged Into Sunlight is, and as much as a nightmare this track is, I still think there was some space for them to push their boundaries.

What happened with Prosthetic is rather strange since they have been there for quite some time now, but they deserve the support no matter what. My opinion is that this specific project can top many spooky-listening black metal / noise bands out there, they don't have the popularity they could have, and that's why I expect to be moved more than what happened with Terminal Aggressor II. A surely interesting listen, but well into Dragged Into Sunlight's comfort zone.