Of Feather and Bone - Embrace the Wretched Flesh 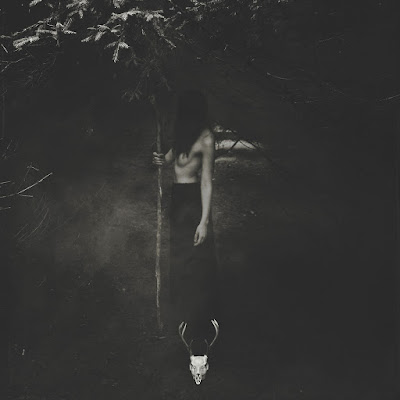 In 2015, I was totally clueless about this band, which managed to release a record in 2018 named Bestial Hymns of Perversion, that made it to my top albums of the decade list. I learned about Of Feather and Bone with that release, promoted by Profound Lore Records that I follow closely, and I was impressed by their death metal stench once I finally got down to listen to them properly. I never cared to look into their back catalog at the time either, and for a long time I have only been listening to bits of Bestial Hymns...

As peculiar as the name is for a death metal band of this kind, the cover artwork of their debut Embrace the Wretched Flesh just adds to this oddity even more. Noticing the short length of the tracks, I realized that Of Feather and Bone originally started as a hardcore punk band and that's what this record is about. A year later, they made a swift change to the sound I was familiar with by releasing a two-track demo, before stomping down the earth with a full release in 2018. In all the events regarding this group, I had been late to the party, but now I finally have a clearer picture.

While I will pick their death metal side to their hardcore side any day of the week, Embrace the Wretched Flesh is an undeniably entertaining and hard hitting record. With a duration of twenty three minutes, it showcases the band's aggression through breakdown filled hardcore punk and some filthy grindcore passages that I loved, as I don't know if I have enough ape in me to listen to a purely hardcore punk album. The screamy vocals are very good, the guitar lines entertaining as hell (slightly, slightly less breakdowns might have been even better, but they don't work as song part fillers) but most of all, I enjoyed the pummeling drum work.

The album flows nicely, most of the tunes do not contain anything unnecessary and its unfriendly characters stems from both music and lyrics, being as hateful and attacking as you would imagine. "You Alone Will Suffer", "Bound to Guilt", "Proclaim of Hate" and "Ordained In Fire" are some of the highlights for me, yet as a whole Embrace the Wretched Flesh works its way to your guts fairly easily. Fans of more traditional extreme metal should move on to their later stuff, but for the hardcore audience I think it's a listen that is worth your time.

1. Ordained in Fire
2. Calloused Embrace
3. Confined Violence
4. You Alone will Suffer
5. Proclaim of Hate
6. The Deafening Call
7. Bound to Guilt
8. Ignore Their Remorse
9. The Profane
10. Existence Through Hatred

at January 05, 2020
Email ThisBlogThis!Share to TwitterShare to FacebookShare to Pinterest
Labels: Grindcore, Hardcore Punk, Of Feather And Bone