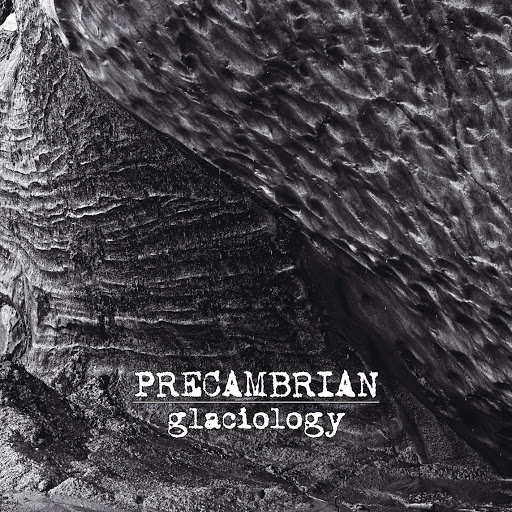 By listening to Precambrian for the first time, one would be correct to relate them musically to Drudkh and that's not by accident, since it is a essentially a side project by the same members: Krechet, Vlad and Roman. While all the side projects of these musicians are fairly interesting, I've always had Precambrian as an even more isolated case in an already isolated environment. This fellowship of bands remains as private as possible and whatever we know of them is only communicated through their music.

Glaciology is not technically an album but a compilation of the band's first two (and only) EPs, 2014's Proarkhe and 2016's Aeon. However, the first three tracks in this release are new recordings that were meant for a third EP, which was then converted to this full compilation that basically includes all the material under the Precambrian moniker. What draws the attention is the heavy thematic inclination towards geology, paleoclimatology and the study around the nature of snow, which is usually very superficially touched in black metal, but this time it's possible that these guys did some actual research on these subjects.

There are no lyrics available so I imagine whatever I can from the titles only, which are still giving up a lot of hints on the band's inspiration. And while I have university education in this area, I am wondering if Roman also has done something similar, or they spent time researching online about these terms. The track list of Glaciology goes as follows:

Just for the sake of knowledge, we can break down some of the words we see, starting from the band name and compilation title:

Precambrian refers to a vast period of time of the age of the Earth, namely starting from its formation and almost reaching the era when the first multicellular organisms started appearing on the planet, which is called the Cambrian era. Precambrian takes up a huge percentage of the Earth's lifetime and is still not strictly defined, but you can think that our planet is ~4.5 billion years old, the Cambrian era started 570 million years ago, so the time span before that to year 0 is a time period so big that it's hard to comprehend. A series of profound events happened during the Precambrian era, that ultimately led to the formation of complex lifeforms on the Earth.

Glaciology is the study of glaciers (huge moving bodies of dense ice), and the band's decision to name this collection like that, makes me think they wanted to have a concluding release and close the Precambrian chapter. The tracks from all the three EPs are similar so a compilation is a reasonable wrap-up that also offers a consistent listening experience, but let's continue for a little bit. "Lava" and "Sulphur" are more popular terms, so:

I'm sure you were hot into geology before, and you are even more into it now. Returning to the topic of the music in Glaciology, if you have ever heard of Drudkh or like minded bands then you will not be caught off guard by this. The guitars are thick and slay hefty, repetitive riffs, the dusty production is pompous and the vocals are quite harsh and on point, this time not following the recipe of deep growling like it has been done in Blood of Kingu or Hate Forest. "Cryolithozone" is a mammoth, 14 minute track that features slight noise / ambient in different parts, something that was also used in the track "Firn", yet other than a handful of changes like this, the compilation remains an aggressive and monotonous cacophony that reflects on an even more straightforward side of the band members. I guess they needed a separate project entity for this musical subject, before moving on to more romantic patterns with Windswept. The compilation was released in June 2019 by Primitive Reaction, and it's a must for the fans of anything Drudkh-related.