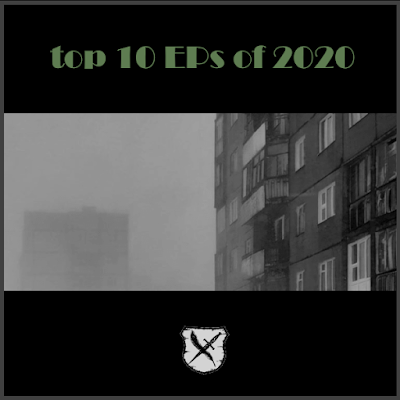 Welcome back. I'm kicking off this year's lists posts with one that I would post a bit later on usually but this time, it was actually the one that was finished first. At the same time, 2020 was the year I listened to the most EPs compared to past years, reaching 84 in number, when I normally go for half that. Many bands give equal attention to their Extended Plays as they do to full lengths, depicting important steps in their careers, and there were several ones this year that I considered to be great to listen to. The genre variation will not surprise you because there almost isn't any, so let's look into some 2020's fabulous extreme metal mini-albums.
Top 10 EP Releases of 2020 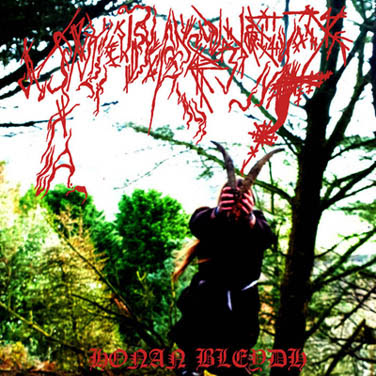 There is no chance to succeed in saying this band's name out loud, however their label Inverted Solar Reqvriem likes having artists with such confusing names (there's unfiltered quality being brewed in a hole somewhere in the UK that needs to be checked out). Honan Bleydh won me with it's simple, direct black metal repertoire and noisy sound, that stresses a lot on the awesome riffs  that had me hooked immediately. The introduction of the self-titled track demonstrates in mastery the fact that you need zero effects to make a powerful track, it has been played on repeat for a long time. It's a pity that apparently this project also released a full length this year but I completely missed it. This is a pure and brutal EP of excellent black metal. [Listen]

9. Ascendency - Birth of an Eternal Empire 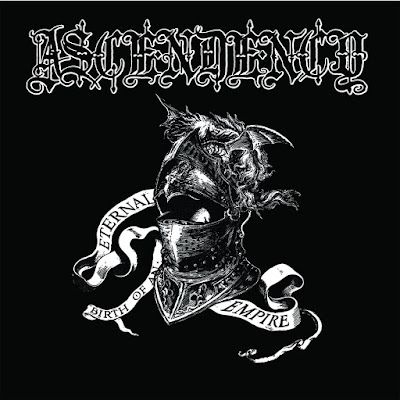 More new blood, this time from Copenhagen, Denmark. Ascendency's follow-up to a strong demo last year is this EP through Iron Bonehead Productions, which means an EP well promoted. Even though I am not thrilled by every release under this label anymore, Ascendency definitely offer a fresh approach to black / death ~ war metal, in a way that you don't have to be in a frenzy to enjoy it. I'm not going to say that you haven't heard it before, but the attacking compositions in combination with the black and white helmet on the cover, make this a good bargain, with many notable moments. Highlighted track is "Culling the Weak". [Listen] 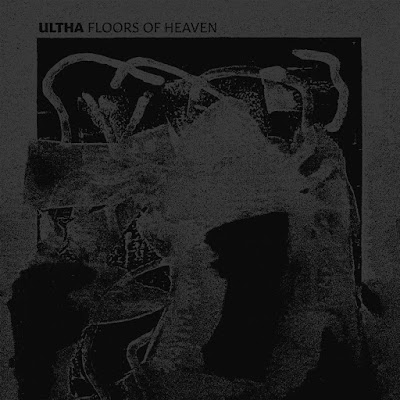 I had a familiar experience when I heard Ultha's Floors of Heaven, with when I heard Twilight's Trident Death Rattle. In both cases, I didn't think I would like it as much as I did and even though the latter is a bit more melancholic, these two EPs go really well together. Floors of Heaven has two stunning tracks with an immense atmosphere, intense and varied vocals, and several layers that build an awesome sound that makes Ultha convincing, in less than ten minutes duration. This here is the beauty of good EP releases. Highlighted track is "Forever Always Comes to an End". [Listen] 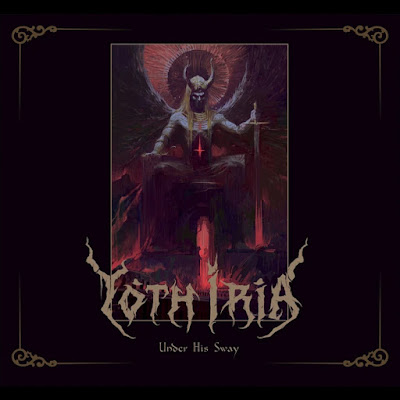 (full post here) It feels like such a long time ago in mid January when I first heard this, when hell hadn't broken loose yet in Europe. Not much more needs to be said for this release and now, we have to wait for the scheduled full length that will come next year. [Listen] 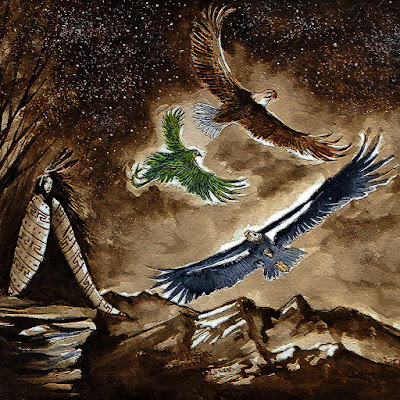 The man behind this project is quite busy with other bands that are all under a small label named Night of the Palemoon, most notably with the act Mäleficentt that released a fine full length this year. Mäleficentt's album is more raw black metal, but Ixachitlan is heavily influenced by the history of native American tribes, both north and south. What I liked in this EP apart from the nicely drawn artwork is how the concepts are also raised through the music as well, which conveys such a unique feeling when Eagle, Quetzal, and Condor is played. The title and songs have a clear reference, the material is quite atmospheric and epic, with characteristic howls starting from the first track that elevate the compositions even more. [Listen] 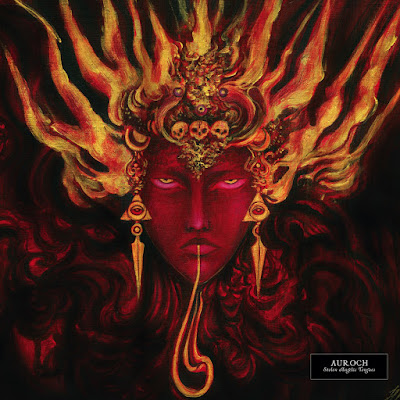 Since Mute Books, it was about time until Auroch come back with new material and a well written EP is good enough for now. Stolen Angelic Tongues has this slightly noisy production, not polished but still living space for the crushing compositions to shine through and establish the band's own black / death metal sound. It's quite interesting lyrically as well and offers more concise songwriting, surely it is a good moment in Auroch's career. [Listen] 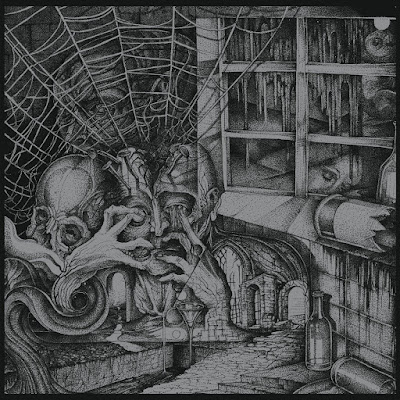 Vonlaus made their debut in 2018 with a self-titled EP and whoever heard it, knew of the potential of the band. They are not standing strong along their compatriots with the release of Röð slæmra ákvarðana (translated, it could easily be a Melvins song in another universe), they offer emotional and unfiltered black metal with pale punkish / post-punk elements, fierce guitar melodies that would remind you of other artists around there (clear Misþyrming influences in "Af ólyfjan og drykkju"), the EP, behind this captivating cover art, is quite carefully put together. I like this more than their self-titled EP and so far, the band improves as it grows. [Listen] 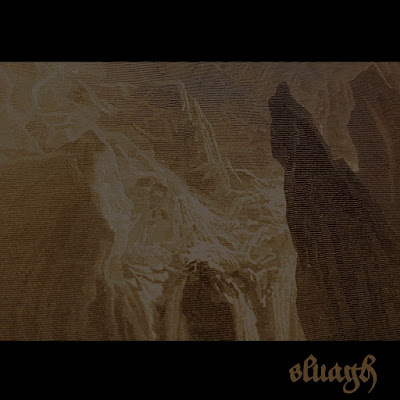 A collective of highly talented musicians from the UK (think of Barshasketh / Úir / Belliciste members) formed this side project and released an EP on the 1st of January this year, and still I believe this is actually a bit overlooked so far. The atmospheric black metal elements are present but often the EP gets fairly ominous and attacking, with a high point being the painful, touching screaming vocals. The guitar work is impressive and elevates the compositions, contributing in making the record quite memorable, as Sluagh form a sound that is between their bands and Icelandic mammoths like Naðra. Highlighted tracks are I, II and VI, let's only wish there will be a continuation from the band in the near future. [Listen] 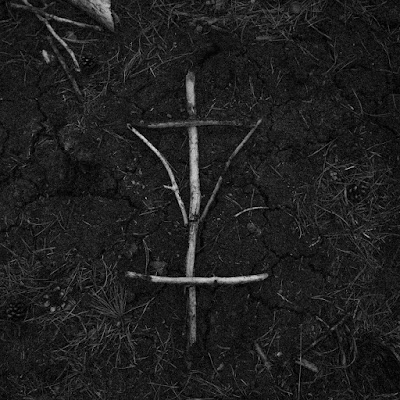 Without any information about this band, the only shared statement on the label's Bandcamp page is simply that "this has nothing to do with corona". De Gevreesde Ziekte, from Eindhoven, represent exactly what I want to listen from black metal. Repetitive, not overly complex, heavily emotional, powerful guitar lines, not a lot of breaks and interludes, tracks and ideas straight to the point and gritty, grey aesthetics. Ω consists of just two tunes and it lasts sixteen minutes in total, but it's sixteen minutes of pure and very intense music. In a way, it feels like this band is what Wiegedood could have been if they didn't waste their potential towards a more normalized indie template, while De Gevreesde Ziekte, are surely driven by what they create. Stunning mini-release and a name to be aware of, for any kind of following activity. [Listen] 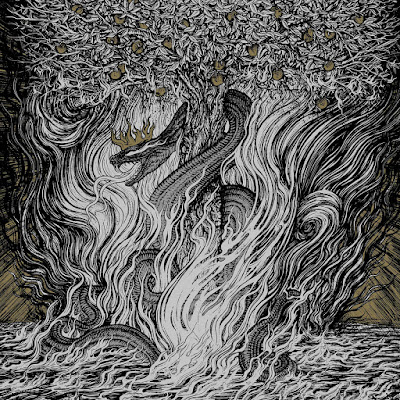 This EP skyrocketed to the top the moment it was released and when this list was almost complete, as it came out on the 8th of this month and was the last EP I actually listened from this year. Given the fact that Kosmocide is a masterpiece, Deus Mortem keep up in the same, perfectly splendid manner, with four new songs of the same energy and consistency. There's no way you will not like the album if you like their previous material, it's baffling how they maintain such a high level from the very first recordings, employing traditional elements but on their very own sound. Physical copies of The Fiery Blood will be released the coming year, don't miss this. [Listen]

at December 17, 2020
Email ThisBlogThis!Share to TwitterShare to FacebookShare to Pinterest
Labels: 2020, AOTY