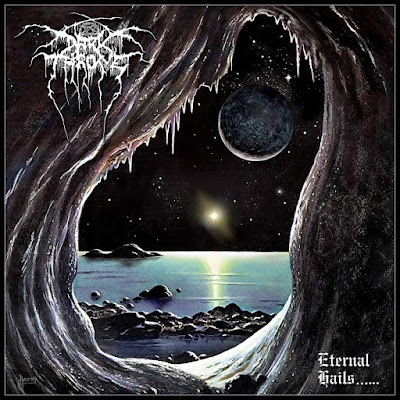 In January this year, Darkthrone's debut Soulside Journey turned 30 years old. While its sound did not resemble what the band would get known for later on, it has made its mark as the full length starting point of quite possibly, the most influential name in black metal. And what is impressive about them is not just the fact that they have maintained the same path since then, it is the case of rather "stubborn" idiosyncrasy when it comes to musical approach. By thinking of their 70's and 80's influences, even if they have had different turns in their style, Darkthrone have really not changed at all till day one. Think of how many bands went astray, or had big changes of heart, or got lost in the ages, while Fenriz and Nocturno Cult kept on paddling. And even if there are clear weak points in their gargantuan discography, a listening course is also a course of this music's history.
While I have not been totally into their punk phase in the 00's, I frequently spent time listening to their albums of the previous decade and especially 2013's The Underground Resistance, which has heavy metal that I have found to enjoy more than a lot of such material out there. I appreciated Arctic Thunder and its camping photograph cover (even though it's not as memorable) and happily bought Old Star from Bergen when I visited the city, parts of it being reminiscent of a little bit of a more intense "black metal" sound that was not there for a long time. All in all, Darkthrone have honed the old school heavy / doom / black / speed metal recipe into the mainstream and through personal playing style as dedicated fans, but not as copycats. With all that said, what is there to listen to from yet another release? How can they succeed in catching the attention once again? As numerous releases, re-releases, countless compilations after compilations, rare pieces in all formats have proven, Darkthrone have reached the state where it doesn't matter what they release, as the fanbase and its roots are stronger. By now, this logo is the black metal equivalent of The Ramones t-shirts in global clothing chain stores.
By the time Eternal Hails...... was announced, first thing to notice is the cover. I am not used to them not using their own artwork, and especially to pick a work that has been used many times before in underground metal, most notably within 90's black metal itself and the Greek band Zephyrous, who also picked the same art. The original piece is named "Pluto and Charon" by David A. Hardy, dates back to 1972, which in turn could have been inspired by a very similar photo from an expedition in the Arctic from the beginning of the previous century). Of course, I could make an easy guess if I were asked which of the two bands asked for copyright permissions to use it for their album, but this picture shares some truth on such topics. 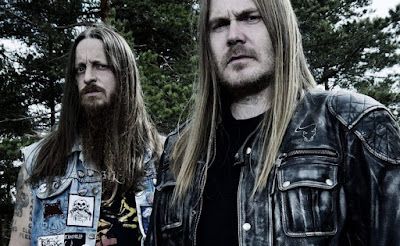 The aspect that you will never take away from this band, is its organic sound. How natural everything sounds is like it was recorded in a much earlier time when technology was still not so invasive to the musical instrument. Eternal Hails...... is a pleasure to listen to from that perspective, just to appreciate the raw and authentic sound of Darkthrone, and also of metal. On its own it doesn't make the record great, but it has always been something to appreciate and probably will not change in the future either, a word that might be unknown to the project anyway. There are five songs in the record that run a bit longer than usual, as the shortest one is above the seven minute mark, and Darkthrone exercise all their prowess on slower heavy / doom tactics. The only surprising part of Eternal Hails......, is by far the last composition "Lost Arcane City of Uppakra", which refers to an archaic Swedish city of the same name (more accurately, Uppåkra), an interesting piece of history with traditional anti-Christian lyrics in case you have missed them. The song's middle part and ending sees the band experimenting a bit with cleaner guitars and background synths that create a space-like feeling (justifying the cover), something I would never expect from Darkthrone but here we are.
Other than that, Eternal Hails...... is business as usual. After several listens, I noticed it grew a bit more than what I thought of it in an initial listen, but by now I can't help but think that a new Darkthrone album is like a new Motörhead, with a slight twist here and there. I'm sure the fans and the band are more than delighted with such a statement (why change a winning team) but to get more specific about this record, I did find a lot of parts of it just not as hard hitting as expected. The riffs are there, the raspy vocals are present, the melodies reek of the old school, yet Eternal Hails...... feels like it holds back and is going into levels of predictability that would make it music to leave playing, and not to focus on. It's regular Darkthrone. I heard a lot more filthy, traditional doom in the slower parts of the record, but this time, the band doesn't punch as hard. It doesn't seem like an effortless work on their part, but often the tracks are dragged more than need to reach these high durations, constituting in pieces with fine moments in between dull instances. Honestly, I can imagine older fans, who have been following the genre closely for many years, discarding this as mediocre very quickly.
As a person who didn't grow up as this band grew up, I haven't been let down by them as much as I have been blown away. By now, I follow Darkthrone from a distance so if most of the music in the album is enjoyable, then it passes the mark. Eternal Hails...... is a slight let down compared to their previous record and not one I will be re-listening a lot, but there's surely something to mention for parts of its music, as a hint of a new idea from them (not innovative, but from the same, aforementioned influences they have). "Wake of the Awakened" and "His Master's Voice" are tracks I liked almost whole, and the rest of it is just nice Darkthrone tunes, worthy to have a known Chernobyl meme attached to them.
Damage: 3/5 [Good]
Facebook
Listen
at June 30, 2021
Email ThisBlogThis!Share to TwitterShare to FacebookShare to Pinterest
Labels: 2021, Black Metal, Darkthrone, Doom Metal, Heavy Metal, Norway