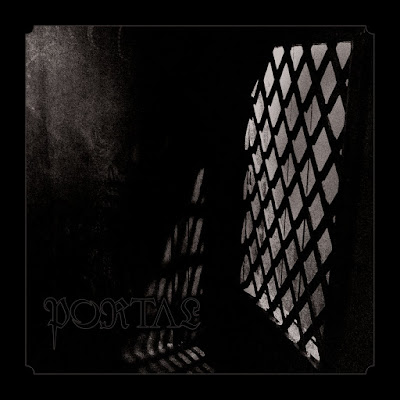 The Australian band Portal have a long history since their inception in the mid 90’s and definitely one of the most unique projects in extreme metal, posing as a challenge to the ears even of experienced listeners. There are not a lot – if any – other artists that manipulate sound like them, as the term death metal is only set by convenience and not because it is reminiscent of the genre’s typical examples. In fact, it couldn’t be more far away. It’s not driven by extreme technicality either, but instead wrapped around tense and ugly cacophony that shreds the average idea of riff / song structure completely.

Big shoes had to be filled after their, in my opinion, most dominant album to date, Ion from 2018. That record has their craft mastered and in frenzy, with a cutting edge production, fully aggressive and non-linear turnarounds that I still haven’t recovered from since it was released three years ago. I learned the band with Swarth, another beloved but not their best album, while the further back one goes, more and more murkiness thrives in their material. I think Portal had a great decade in the 10’s, but every time I am through with one of their releases I don’t feel like expecting another one. This makes the waiting time between records easy, but to experience new work is always a new challenge, especially when it’s not one but two full albums. As the release of Avow had been announced for the year, the band dropped a second surprise album the same day, named Hagbulbia, and the way I decided to listen to these was one after the other and with no prior reading / listening to singles or sneak peaks of what they might contain. Such is this band that it is very difficult to have your attention elsewhere when they’re playing. At first glance, it can be noticed how they return to dark grey / black cover art after the slight more different artwork of Vexovoid and Ion, which also hints the earlier records.

I don’t have any kind of expectations before going into a Portal record, mainly because of the kind of uniqueness they have. And honestly, Avow takes off with its longest track “Catafalque” that half way through was for me rather dull and ineffective in what this band achieves usually. The cutthroat sound of Ion is missing but the composition itself feels like it’s halting, it gets too repetitive with unimaginative riffing and delivers not even close to the impact that the listener is used to from this extraordinary project. The same frustrating pace is kept with the second track “Eye”, both of which do not appear to me as Portal’s bright moments when it comes to longer running tracks (“Olde Guarde” from Ion was brilliant). Such mannerism of slower, more minimal parts in their songs apart from the frenetic faster moments, seems to be overly exercised in Avow as Portal adapt more and more clearer noise elements (again, the noise track from Ion was brilliant) but it doesn’t manage to maintain the crushing atmosphere it aims for, while at the same time being quite unstable between its different songs. For its first half, the record does not have by any means the successful flow of previous releases.

Going harder and radically more extreme, as Portal used to do, is a rare occurrence in Avow. A few instances in “Manor of Speaking” bring back some of this glory, as well as the last track “Drain”, but there is not much more other than unfathomable monotony with unclear purpose, at least to me. I don’t think I have heard a piece as repetitive and predictable as “Bode” from the group for example, which shows how for the most part either they didn’t really know how to fill the empty parts of their compositions, or the experiment simply failed in this release. At least it is not easygoing or any softer at all than what we are used from them, and the uncommon song constructions are presented through the band’s own mindset, so you will definitely recognize this as a Portal record from the first seconds. In a more general sense, it could still be enjoyed a lot from the band’s fans, while for me the idea will be simple from now on, sticking to specific older material where real scare and substantial darkness are present. Comparing Ion and this back to back, is a quite clear indication of this band’s highs and lows.

Portal went for a form of musical disintegration with Avow, which still has the main elements of the band that makes them loved among their fans. For me, the idea was not acutely conveyed, as I found several times throughout the listen that the material was aching and the tracks didn’t deliver, resulting in an overall underwhelming effort with just a few fine, scattered moments. As for Hagbulbia, a pure noise record with some hints authentic intensity, it was this, that saved the day and the year in regards to the band for me. In an otherwise disappointing effort, Portal decide to make some material that steps even further from metal and more into abusive electronics, joined by The Curator’s imposing vocals makes up a fine outcome.