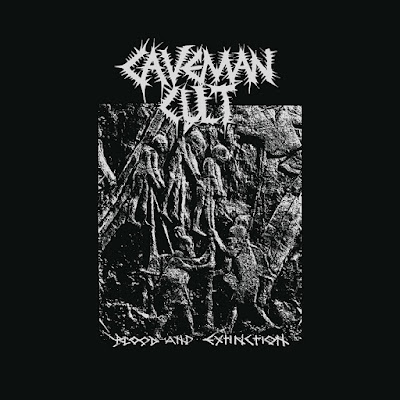 Arcanist (US) - Caustic Apparitions:
Quite filthy raw black metal with some punk touches. The tracks are not the hardest or most compelling ever, but it is a pleasing listen. [3/5]
Azazel (Fin) - Aegrum Satanas Tecum:
I've heard every riff in this album before. You've also heard every riff in this album before. Painfully typical black metal, but hey, Chris Moyen art is always nice to look at. [2/5]
Caveman Cult (US) - Blood and Extinction:
Savage War is Destiny was gruesomely elegant and dazzling. Caveman Cult keep it up with an accurate creation of war metal that properly comes at you as a knuckle duster in the face. [3.5/5]
Enslaved (Nor) - Caravan to the Outer Worlds EP:
Following the disappointing Utgard, this EP's self-titled track had an ounce of what I consider great in Enslaved. In the rest of the EP, new ideas are explored by the band, but it's unclear. "Ruun II - The Epitaph" is interesting and mellow, the first Intermezzo is nothing special and the second one is nothing more than average melodic metal. What's happening? [2.5/5]
Full of Hell (US) - Garden of Burning Apparitions:
A swift carnage of grindcore, noise and clean production. Against religious ideals, Full of Hell own their alley and comfortably dwell in it, yet I would have liked the record to sound more wholly violent. For me, the last two previous albums were much heavier. [3/5]
Gloosh (Rus) - Sylvan Coven:
I'm so glad this guy proved me right. Since last year, I've been murmuring about this quiet force and the couple of fine EPs it had put out, now everything resonates to an impressive, captivating debut full length album. It totally dominates the atmospheric black metal territory, while not even being constrained there. Sylvan Coven is indeed a wonderful work of art. [4/5]
Revel in Flesh (US) - The Work:
It's disheartening to see the metal scene fall for this. It's a pile of pretentious experimental audacity, and the technicality won't save you if your ideas are for the trash bin. And sadly, a handful of neat saxophone parts didn't save it this time. [1/5]
Revenant Marquis (UK) - Below the Landsker Line:
Tasty riffs bounce off distorted production with a horrible echo effect. One might as well chop their songs into pieces the next time, but still this album's beauty can be recognized, like a beautiful human behind broken glass. One of the leading albums Revenant Marquis has put through. [3.5/5]
Wraith (US) - Undo the Chains:
Didn't know this band, but Undo the Chains proved to be rather entertaining. Nice black / thrash with no overstatements. [3/5]
Labels: 2021 Bullet Ratings Journal