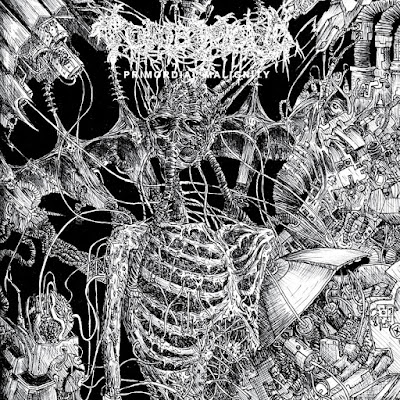 Release date: February 2017
Genre: Death Metal
Origin: Canada
Label: Blood Harvest
Listen: Bandcamp
As a first taste of Tomb Mold's capabilities, the debut Primordial Malignity set the stage well for the band even though I wouldn't have foreseen the evolution that followed with their two later releases. There's a lot of potential in this first offering, as well as a rawness characterizing their first steps, in a sense that it makes it quite more specific in its goals and just plain enjoyable. As a, by now popular act of the modernized, with cleaner aesthetics but studio-ensured heaviness, likeable brand of old school death metal, Tomb Mold are in the eye of the cyclone and not by chance.
Primordial Malignity is half an hour long. It has direct, fury-fueled, futuristic lyrics and songs that span from 3 to 4 minutes, if you exclude the outro from the last piece. Its down-tuned, thick production grants a pleasing amount of heaviness, and the growling is on point. It's not a chatty album, as Tomb Mold just go for direct clobbering instead of more complex death metal pathways. There's nuance of sludgy passages, yet the grooves are dominant throughout the record, along with faster, more technical playing that has been thriving in the genre for 30 years now. The tempo changes are frequent, as Primordial Malignity freely offers plenty of headbanging moments in its solid tracks. Apart from the few ticks that you can check out of your how-to-death-metal list when listening to a new artist, Tomb Mold don't throw in anything new but already aim well with the material of this album, to be considered worthy of your time.
A few of the faster, more maniacal playing in some tracks of Primordial Malignity stand out for me, as the main plus here is the ample, brutal riffs. As the record goes on, it proves to be a bit flat and difficult to distinguish one track from another, as Tomb Mold stay too focused on one line of playing, yet by picking out specific tracks and listening to them alone, the listening becomes easier. Despite being in Blood Harvest, the band is well-rooted in the modern US scene rather than going even close to the Swedish chainsaw sound, yet hints of attempting to put together their own sound are already evident. Primordial Malignity does not have anything groundbreaking to show to the listener, however it's undeniably heavy in its approach without overstating things. While they definitely had all that was needed at the time, the material wasn't yet perfected to higher efficiency.
Correctly, we're dealing with some capable death metal. Not always fast, a bit more groovy, with nice guitar lines and solos, deep growls (that could really go places with a bit more variety), nice texts, but yet not the explicit motives of the band, as it is not sure what direction they're going to take, or if they plan to at all. Later on, significantly more interesting content would be unleashed from Tomb Mold, just a year later.
Tracklist:
1. Intro - They Grow Inside
2. Coincidence of Opposites
3. Bereavement of Flesh
4. Primordial Malignity
5. Merciless Watcher
6. Clockwise Metamorphosis
7. Twisted Trail
8. Vernal Grace - Outro
Damage: 3/5 [Good]
Labels: 2017 Canada Death Metal Tomb Mold