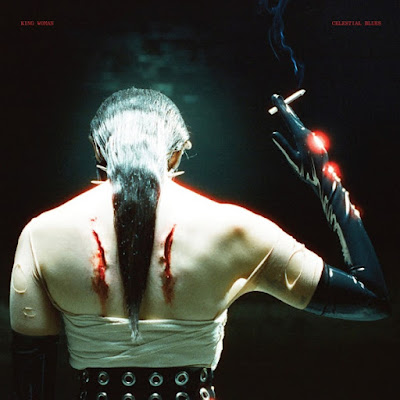 I have to admit I completely missed King Woman's debut album Created in the Image of Suffering four years ago, at least at the time it was released, since I got around to listen to it some time later, and the reason could have been how much I thought this name is close to King Dude, which made me almost already know what I will listen from this band. By listening to the debut, the case was well like that as one can point out musical similarities between the two, but King Woman surely is a separate entity that doesn't call for unnecessary overshadowing.

Introducing itself with a slightly unsettling front cover, Celestial Blues is not as innocent as the title would suggest but no fan of this project / style would be fooled like that about the content. With the new record, King Woman stretches more on spiritual religious aspects of the frontwoman's Kristina Esfandiari life, mulling over despair and mourning as a textually rather dark record that uses theistic figures and elements to describe much more personal experiences. Of course, the crawling, gloomy, slow-paced (for the most part) music goes along with the ongoing elegies, this time putting more emphasis to clearer doom metal passages, while the post-metal temperament always manages to stand out. At the same time, the absolute highlight in Celestial Blues and any King Woman work, is actually Kristina's thrilling voice.

The focus on more variety compared to the first album as well as the emphasis on some heavier guitar parts gives the band the boost it needed, especially in the first part of the record lie the best moments of Celestial Blues. The heavier, stoner / doom metal distorted guitar lines distantly bring Pallbearer to mind, while the common grounds with Chelsea Wolfe are quite strong throughout the release in its entirety. The self-title opening tracks efficiently demonstrates the above and starts Celestial Blues with a blast, which continues with the second track "Morning Star" (a reference to Satan), one of my favorites as a whole. However, the two most compelling tracks of the album for me were by far "Boghz" and "Golgotha", with intense heavier moments, slow paced, painful passages, and the latter featuring a stunning cello part by Jackie Perez Gratz (who you may know from Giant Squid or Grayceon).

For the second half of Celestial Blues, the album unfortunately doesn't maintain the same level of competence musically, as I found the compositions aching at various points. "Coil" and "Psychic Wound" are mere average songs (Imagine the same ones without such a unique voice), but more specifically the use of harsher vocals here didn't come out as that convincing to me. With the exception of "Entwined", which does have some worthy moments, and the sorrowful, emotive ending piece "Paradise Lost", Celestial Blues suffers from a few filler moments but thankfully not too many, and it's not what's left in the mind of the listener after it's done. The more potent works in the album stand out and contain possibly some of King Woman's best creations to date.

Recognizing a certain evolution in this project's music, this album is one I would return easier than Created in the Image of Suffering, however only for specific chunks of it. As much as I adored a few tracks, others left me almost indifferent but in total Celestial Blues is a work that deserves its appreciation. It's hurting, it's distressed, darkly poetic and probably fulfils the artist's vision as it was meant to be. If King Woman has evaded you so far, and you like the approach of other musicians like King Dude and Chelsea Wolfe, it's almost a crime not to listen to this as well.