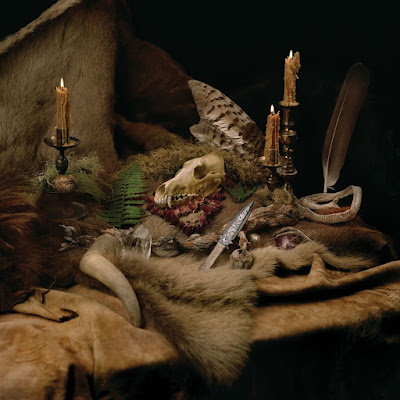 Release: August 20th, 2021
Genre: Atmospheric Black Metal
Origin: Washington, US
Label: Relapse Records
Listen: Bandcamp
Looking at the cover of Primordial Arcana, one can draw parallels to Watain's The Wild Hunt, considering this its "atmospheric black metal" equivalent, as that album was also one of the most daring and mature efforts of the Swedish band. In a similarly passionate manner, Wolves in the Throne Room have also put forth to create all equipment and tools for their aesthetics on their own by now, becoming totally independent when it comes to the development of their 7th album, Primordial Arcana. Their video clip of the first single from the album, "Mountain Magick", offers a very pleasing visual experience of all this as well.
As far as I follow them, I don't remember any of their works being praised as their previous album, Thrice Woven. As it has been noted by fans, the musical enrichment following the post-Celestial Lineage era has been overly beneficial for the band and it's not an exaggeration to say that they are on their best form now, rather than in their first most influential albums. As the overlords of Cascadian black metal, we are witnessing their evolution into a band that becomes one chapter of this music on its own, and its members as artists with such authentic substance that a certain level of respect is almost deserved by default from all the fans of the scene. How they have handled all aspects of Primordial Arcana, and by how well crafted the outcome is, makes me believe that Wolves in the Throne Room now unleash their truest self, in the most unfiltered way possible.
Primordial Arcana is a unique beast on many aspects. First of all, the production is not as cleanly worked as it was in Thrice Woven, yet it's quite organic and gives massive space to the instruments. Usage of percussions has grown a lot, adding more layers of intensity to the tracks with their immense echoing sounds. Melodies dance around and come and go, so naturally handled by a band that is possibly one of the few real masters of this craft. It's usually profoundly atmospheric and very close to its essence, nature, and only chooses to get more violent at specific moments, e.g. in the introduction track or "Primal Chasm (Gift of Fire)". Slightly shorter compositions than usual are featured in Primordial Arcana, with the longest track "Monsters of Rain and Storm" being a sensational piece that offers an ideal listening experience if you want to know what Wolves in the Throne Room is all about.
A fair amount of ambiance is also explored by employing an even wider variety of sounds, like in the beginning of "Spirit of Lightning" or "Underworld Aurora". The certain underlying ritualistic vibe of these parts, along with the slower melodic passages that follow enhance the capacity of the record, which is hard to miss or hard to skip once it gets under the skin. Primordial Arcana has a lot of elements that would make a masterpiece, and Wolves in the Throne Room have no one to compare to, as they didn't just set the bar, but they also placed it there in the first place. The last couple of compositions "Eostre" and "Skyclad Passage" present two different sides of the band through dark ambient only, the first being a nostalgic tune with slight dungeon synth elements, and the latter being a darker, more ceremonial piece to end the record.
What's more essential is the state of Wolves in the Throne Room at the moment, who are at their best form and will be under discussion for their later discography, as much as their earlier one. Primordial Arcana gets points because of how complete it is as a whole, the most mature offering of the band and one that characterizes them more than anything they have done in the past. As a person who was never a die hard follower, it's impossible not to recognize how well being independent has turned out for them, and now only the sky is the limit.
Damage: 4.5/5 [Brilliant]
Labels: 2021 Atmospheric Black Metal Black Metal USA Wolves in the Throne Room