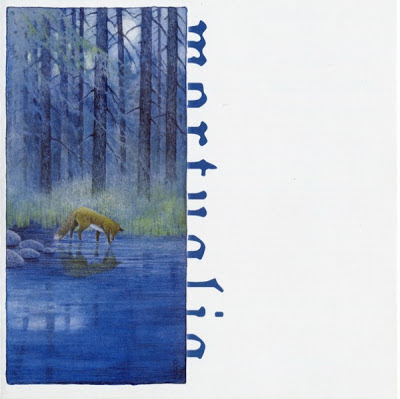 
This act released a ridiculously good album back in 2007, set the expectations very high despite the fact that it was the debut release. With the second album "Blood of the Hermit" it has been made clear that Mortualia are nothing but a DSBM maestro. The mainman of the project is Shatraug, you might know him from Horna or Sargeist, and lately played guitars for the new Behexen album.

This is strictly for fans only, it has long songs (each one 10 to 12 minutes long) and ugly shrieking vocals, the best ones for the genre if you ask me. The simplicity of the cover is captivating too, i would think twice before buying if it wasn't for it, still its an impressive album for the late night hours.
at December 04, 2012
Email ThisBlogThis!Share to TwitterShare to FacebookShare to Pinterest
Labels: Black Metal, Depressive Black Metal, Table M