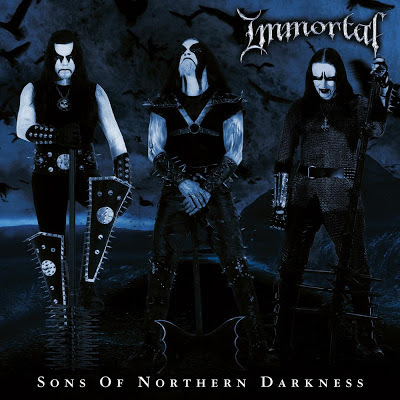 With a delay, i finally managed to bring up another post here, and its a band that no one is unfamiliar with. An admirable band, for the solid and unchanging attitude over the years, for the great music, for the video clips and the photo shoots (you gotta admit), for the unique views on the norwegian crimes -and this might be another phrase i'll be using from now on- and for all the memes that float around these days.

"Sons of Northern Darkness" is one of my favourite Immortal albums along with "In the Heart of Winter" and thats something that does not happen very often to me, i usually like the first albums of bands since most of them start to experiment and end up drowning in pig manure musically. This album has some really good songs and its a pleasure from the beginning to the end, it does not get repetitive, it has a clear production, it has the band members in funny positions on the cover and on the CD, it has Tyrants, it has everything.
By VJ-atyc at February 10, 2013
Email ThisBlogThis!Share to TwitterShare to FacebookShare to Pinterest
Labels: Black Metal, Table I