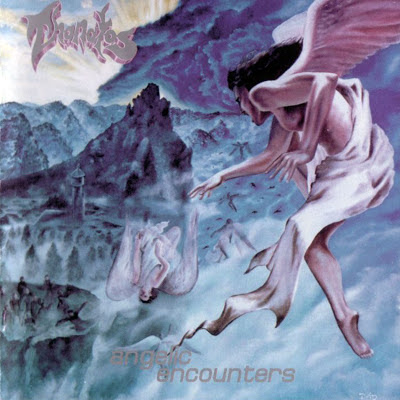 Thanatos is one of the very first dutch death metal bands and they were jamming back in the middle eighties, when the average metalhead had pink hair and leopard pants. They did split up in 1992, but they were reformed and released some albums to meant to bring suffering, chaos and filth. One of their later albums is this one, which is nothing less than a punch to the gut of modern death metal.

The thrash element and the death element have been masterfully knitted to compose an anti-mainstream anthem album that Angelic Encounters is, these guys know how to write death metal songs and fill them up with solos and old school growls, so that the fans are pleased and the outsiders wanna throw up. Nothing's better than that. The remastered version was released in digipack and vinyl and it contains a cover of a Massacre song, with guest vocals from Joe Lewis of Vital Remains.
By VJ-atyc at February 16, 2013
Email ThisBlogThis!Share to TwitterShare to FacebookShare to Pinterest
Labels: Death Metal, Table T, Thrash Metal