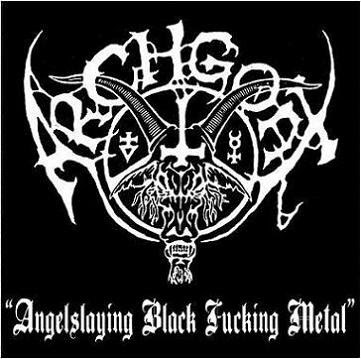 Country | Finland
Genre | Black / Death Metal
Label | Hammer of Hate Records
Dynamic range | DR7
With a few short releases, Archgoat decided to split after the release of their debut EP Angelcunt (Tales of Desecration), only to come back to life eleven years later and start working on new material. Angelslaying Black Fucking Metal was what the band decided to offer to the hungry fans that have been anxious about it all this time, another EP one year after the regroup, pretty much in the vain of their older stuff. However, this record much weaker and more shallow, compared to previous stuff.

If one thought that Angelcunt was short, lasting only thirteen minutes, they should check this out. Three songs that barely pass five and a half minutes in total, certainly too short and to quick for one to notice in a load of music or similar. These three tracks combined could easily be used as one filler track for an actual whole album, it contains such a small amount of music. That was a cruel comeback dudes. I believe they were in a hurry to release a full length (that came out in 2006) and wanted to put out something before it, so the EP was created in something like a day or so, like the listeners would not notice.

However, I think many fans that like this band are satisfied by the EP, which doesn't lack anything for the standards of Archgoat. It's not friendly melodic, instead it still is uncompromising, raw and heavy. The compositional level is not hard to reach, but it seems like they had better things to do during the conception of this, as if it's something they hadn't completely think through. The production is more polished and doesn't have the filth of the early nineties, which was lovely. Instead, it has created a metallic sound for the guitars and left the drums a little behind, making the sound cleaner but not improved by any means. Even the vocals don't have the bits of diversity they had on Angelcunt, they are limited to monotonous growling only.

There is "Penis Perversor", aggressively opening the record with some screaming samples and the same old riffs, for about two minutes. It is a punching track but doesn't get out of the bathroom. The second "Thrice Damned Sodomizer (Stream Of Blood)" is the longest and most solid song here, it gives the impression of a full song and has a couple of nice synths here and there. The last track "Satanic Oath" lasts 43 seconds and it's relatively useless. Again, the band does not stray from the cloud of death metal that much, meaning very un-technical and watered down death metal over the actual genre. Therefore, this EP sucks in two genres.

I enjoyed the first EP very much but almost hated the second. Maybe I had negative thoughts about it before listening, but if it had anything interesting, it would change my mind. With a stomping title and some empty songs, it seems like they tried to recapture the love of the scene from nothing and if this is considered a return, it's a god damn lame one. Hopefully, their later full albums were meant to repay me and everyone else in full or even more...