Warwulf - The Archetype of Destruction (2013) 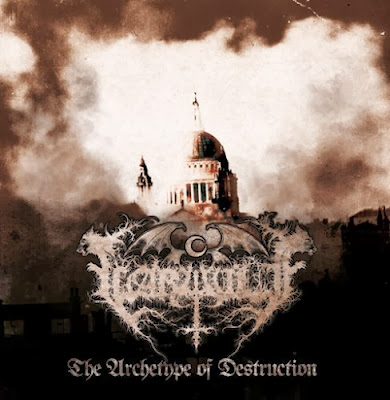 This band is an one man project by a guy named Wulfskrieger, who has also done the vocals for Battle Dagorath's debut Eternal Throne in 2008, apart from his vile creation named Warwulf. The band has released four demos and a split in a period of almost ten years, which is not that frequent at all, but at least we finally have a full album The Archetype of Destruction, the most complete offering by him to date. I found out about them from the latest volume of the underground compilation Morbid Tunes of the Black Angels, which has always been in favor of D.I.Y, noisy black metal, the sound Warwulf have as well.

If you are a fan of bands like Satanic Warmaster or Goatmoon, this is for you and you will love it. The atmosphere is built on a thick, harsh guitar sound that overshadows almost completely the drums and the bass, while leaving a lot of space for traditional screams to unfold and dominate. While the riffs have a lot of variety and perception, it might sound repetitive to someone who hasn't spent time on bands like this and it is rather meant to be appreciated by the fans of the scene alone. A feeling of epicness and elation derives from the dynamic guitar lines, showing how careful the guy was when he composed this, having a clear aim and achieving it with a few tools only.

Even though the band originates from the US, one can hear elements of the Finnish scene a lot. Musically, there are no tricky moments and everything starts and goes on as usual in such situations, it is a straightforward album that only goes a little more atmospheric and sorrowful with the last and instrumental song "Of What Remains...". Other than that, it's proud of it's influences and pure in it's entirety, but I hoped it would last a little longer (half an hour of music, broken into seven tracks).

The fact that there are labels close to NSBM that release this, and that some of the bands subjects are elitism and anti-semitism, do not make it a pure NSBM band. Needless to say, I'm not a supporter of that particular ideology but I still don't turn down a good band immidiately only because of it. There are a few and discreet references to such themes in the album anyway, judging from the song titles, since there are no lyrics available. The music itself is worth checking out.