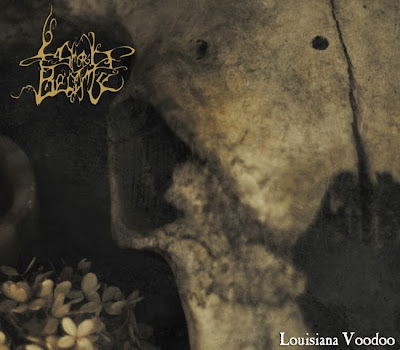 | As the bodies drift away |

Coming from Illinois, he has been active since the mid / late ninenies and he counts six full lengths so far, including this latest offer Louisiana Voodoo. The project moves towards the desperate, razor sharp void of Xasthur-like DSBM but is subjected to experimentation, or just his own perverted visions for his art. I surely don't what's all the big talk about this project and I don't think it's as good as everyone says, because of the mediocrity and repetitiveness of the content, but this album was a little different.

There are a lot more synths this time and the emphasis is given to them, leaving the rest of the instrumentation behind. In fact, the guitars are used mostly to create a dim atmosphere while the drums are extremely typical and maybe not needed at all. I feel like he tried to accommodate a sick feeling as Pensees Nocturnes do, but instead leaned towards more theatrical lines similar to Bishop of Hexen and  most of the songs have pretty nice melodies in them.

The production is a bit weird, as if the sound has been volumed down or torn out, like the soundtracks of old movies that have glitches and noises. No instrument seems to be completely clear and it's like the listener has to overcome a layer of dust in order to dig into a melody or pay close attention to something, making it a bit less enjoyable and more tiring as a whole. Behind the buzz of the sound, there is hidden talent on the keyboards, composing haunting atmosphere close to the grandiose, avant-garde feeling, as if Arcturus spent all their money to drugs and reduced their artistic power to the one tenth, only to release a noisy, low budget dirty album. The last song "The Rats in the Walls" is by far the longest in the record, lasting eighteen minutes while the rest of the tracks vary from three to seven, and it's more into dark ambient than ambient black metal, using the known pattern of a couple of parts repeated for more than one time.

I have mixed feelings for the album and while I like "Strangers", "Drowning" and "Braquemard" a lot, I don't think the album is consistent at all. There is a general randomness of various synths mixed together (the Eastern voices in "Brief Glimpses of Death" describe my point, not fitting at all), vocals popping out of nowhere and sparse, weak atmosphere.  It's different from what I have heard from him so far but it's not any better or any worse either, just a little bit more interesting.