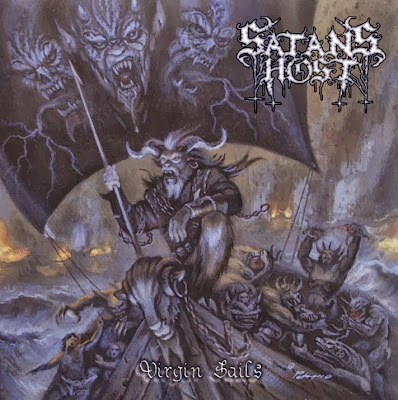 | Darkness casts its shadow on man |

I thought I would never fully enjoy heavy metal again because of the bands' constant and maybe unwilling struggle to get too shreddy or too old school, with ballarina singers and unexceptional songs, effect-driven, lacking spirit. Even when a new band arises that I find solid, it's because of their passion to bring the eighties back and succeeding in that. Now, Satan's Host avoided all this and made their way to a new album that I enjoyed the most for this year when it comes to clean singing metal. Maybe because they went through a period of black / death in the nineties, which is pretty much a Midas touch for any band. Just kidding of course, but with a sincere perspective.

The band was created in 1977 and I have only heard their debut album Metal from Hell that was released in 1986, which was right on the spot for it's time but yet not completely bewitching. I lost track of them and only came across the new release because of the amazing cover (as usual) and the funny album title, hoping for something at least bearable. Lot's bands fade away over the years and these guys have a huge run already.

Right of the back, the concept revolves around darkness and evil with some shots of occultism, the perfect and appropriate themes of bands into the originator of extreme metal, much better than fairy tales and pink make-up, as most of the mainstream bands do nowadays. Finally, I get to read some wonderful lyrics from a newcomer heavy metal band, since i'm way too critical on the matter, this is serious business. The have done Necronomicon references in the past and their approach once again is poetic. Naturally, they are accurately embellished by the marvelous voice of Leviathan Thirisen, the band's singer (who played in Jag Panzer before Satan's Host). The vocals sound direct and powerful, hitting high notes as well as a few torn out screams and growls, as If the guy was born for this position. The double singing in various moments in the album is magnificent and the whole performance delivers exquisite singing fortitude.

Musically, Virgin Sails is one interesting and mauling composition after the other. The production is polished and presents a very friendly environment for the listener to headbang on, while the songs offer plenty of neckbreaking moments, built on furious riffs and solos, as well as pummeling beats all the way. The drummer of the band is called Evil Little Hobbit and seems to be influenced by classic heavy and death metal drumming all the way. While the main fills are close to the regular pattern, there are several moments where he gets more intense will blast beats and complex playing, making the contribution of the drums notable during the album. The reason they are now labeled as blackened heavy metal is not only because of the lyrical theme, but because of the music itself, which is one step further than most of the scene's bands, with more variety as well.

I noticed allusions to various genres in the songs, like the stoner-like riff in the middle of "Dichotomy", the harsh vocals refering to black / death in "Reanimated Anomalies", the Enslaved-driven introduction guitar melody in "Infinite Impossibilities" and the black metal part of "Vaporous of the Blood", not to mention the grungy interlude "Taromati". The groovy beginnings of "Of Beast and Men" and the self-titled track remind of modern groove / death metal too. The overall guitar work is astonishing and worthy of any title, because of the hammering riffing that co-works with the coming and going, wondrous solos.

From what I heard, this is a great album with lot's of ingredients for everyone. I guarantee you won't be listening to the same song again and again, more like you'll be astounded by the variety. It focuses and stays close to the core of heavy metal, but often wanders off in other subgenres without losing track of the flow, keeping up a standard of quality as a whole.