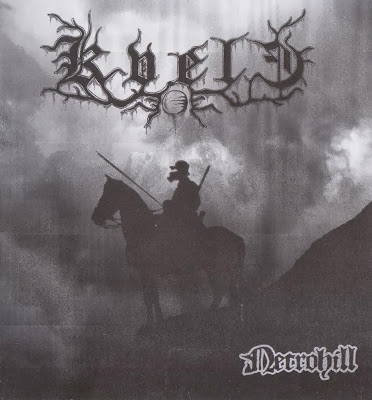 Kvele were created by the infamous Ungod, who is involved in many underground Greek acts like Necrohell, Sad, Slaughtered Priest and others, while managing a small label named Metal Throne Productions. This record was put out by his label as well as Self Mutilation Services as a co-release. His bands usually play straightforward thrash or black metal, in an unfriendly and gruesome form that only anti-mainstreamers can enjoy. This project is no exception, and here's their second full length album Necrohill, a wonderful piece of black art.

The compositions are respectful to traditions and don't approach any kind of modernity, there's a lot of solid riffing going on. The band has improved in many ways and finally they released a full length that is full by definition, lasting 36 minutes. Unlike their first full length Dawn of the Impaler, which was only 24 minutes long and a bit sloppy as a whole, Necrohill represents the band's signature more, which is a combination of standard characteristics of the genre. The production is generally pleasing, with a nice and warm sound that accolades the powerful guitar playing and the overall epic atmosphere.

They didn't experiment a lot with the structure of the songs, which is relatively simple and hinged on a couple of melodies. However, the consistency that was missing before in the band is now established, with more connecting points into each song. There are nice ideas that remind a lot of Norway and the days of the old school, without pretending to be there or one of them. Credits given for the D.I.Y. attitude of the bands, since the members record and produce alone, taking care of the artwork and layout of their albums.

I didn't like the drum sound that much, given that the toms are more like computerized clicks than hits, but still the performance of Ungod (who plays drums and bass here) is appealing. The recommended track I would point out is "Mortuary Winter Souls" and despite the repetitiveness of the vocals, they work fine over the cold layer of the instrumentation. I enjoyed Necrohill because I enjoy their style, even though it does not have something really impressive to show. I'd say this is for black metal fans only.