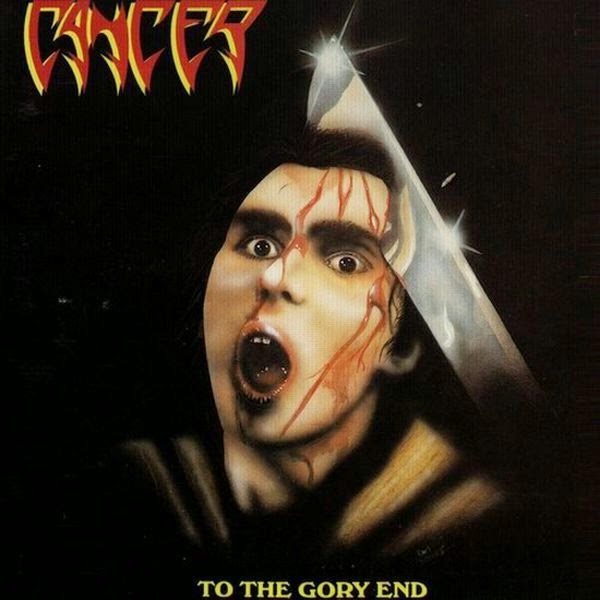 ~ Legacy of his tragedy ~

There were a lot of bands with tremendous potential back in the early nineties, who faded away with time and all we have now is the legacy of their first years. I'm not sure if Cancer is a good example of the fact, but still their first records are more or less amazing for their kind, especially for fans of a more thrashy version of death metal in the nineties. Their debut To the Gory End is exactly that, a good dose of impulsive thrash / death with a sweet retro feeling of what was shining back then.

The simplistic and direct cover of To The Gory End pretty much describes the title of the album, with graphics reminding of low-budget horror movies of the eighties. The band was still young and it's highly possible they were influenced by films like that, when the artwork actually points towards the beloved blade of Jason Voorhees and was based on 1978's movie Dawn of the Dead, a personal favourite as well. The lyrics revolve around such movies and gore, death, witches and the likes, so their attention can be projected there anyway.

The record lasts thirty four minutes, which is a standard length, and it contained nine tracks in total. The production does not differ much from was being released then and it contains all the punching and intimidating moment an album like that should have. 1990 was the year death metal was starting to open it's wings towards the sky of metal, yet Cancer did not fully adjust their sound to immaculate brutality, blending enough thrash metal elements into their music to show the world where all this originally started, as well as the band's tastes, to a certain level.

Given that, it's not difficult to recognize the thrash metal riffs in the vein of bands like Nuclear Assault at some songs, as well as the fast paced riffing and group shouting lyrics often used in the genre. Apart from that, the vocals, done by John Walker, at times have a Carcass-ish tone in them and the compositions themselves include both genres enough. The music of Cancer could be in favor of the early Sepultura records, in the Schizophrenia - Beneath The Remains era mostly. I can't say there is a bad track in To The Gory End, in fact everything in here is splendid.

The guitar work includes enough riffing in each song, as well as a couple of solos here and there, focusing mainly on heavy sounding melodies, and less but enough on very fast / speed jamming. Great work has been done in the changes of the lines and the record doesn't get repetitive, while a short sample (in the self-titled track) and clean guitars (in "Sentenced")  are used in a couple of songs. Needless to say, that the main chorus of the second track "cancer fucking cancer" is catchy enough to randomly scream it while walking days after you have listened to the album.

I was very pleased with the steady vocal work in the album, offering great harsh, spitting word screams. The drum work is affecting enough, while the bass isn't that present to the front lights generally. For a debut, it's a great release by the band that dragged them into the club of the many talented bands of their years, compiling a bunch of amazing records for us to listen today. Notable and not to be missed, highlight tracks are "Imminent Catastrophy", "To The Gory End" and "Body Count".