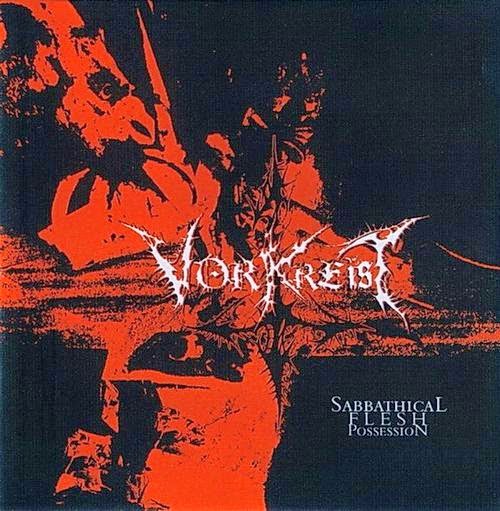 Being one of the main bands of the modern French black metal scene, Vorkreist were born in 1999 and released their first demo in 2001, named Sermons of Impurity. The debut full length would come two years later in 2003, an album that has one of the most amazing titles ever, Sabbathical Flesh Possession. It is undeniably a strong statement and while the music isn't that perfect itself, it makes a great package along with the edgy cover and titles. The band had been working on it for some time and it got them up to a certain level, featuring the female bassist LSK who would commit suicide ten years later, in 2013.

Sabbathical Flesh Possession flows as easy as it is to pronounce it and it offers the same aural pleasure as well. The band did not aim for a flawless, superb record from the start, as the crush would be much harder if they did and failed. Instead, the passion and freedom they had during their early years is a major motive and positive characteristic, bidding on legit black / death metal the ensured way. Listening to the record will not probably bring the apocalypse in your musical standards, but it is really enjoyable due to it's honesty and immediacy.

The production of the record is relatively good but still quite dirtier than their later records. It definitely is audible for a fan of black metal and offers a boost on all the bass sounds, transforming it into something more of a constant magnitude while listening. I have gone through much worse recordings in my life and I'm sure any person that has reached to Vorkreist has as well, so it's safe to say this is an album with enough noise to get the job done, keeping up it's repellent beauty.

While the band is labeled under the black metal be, as it should, the music on Sabbathical Flesh Possession has several death metal elements, providing a mixture of black / death with elementary components. If a death metal band inserted enough black metal guitar melodies, as well as shrieked vocals and a satanic concept / attitude, with the proper talent it would result in Vorkreist, the above being pretty much what this record sounds like. Some of the best moments in here are into the tracks "At the Side of the Beast" and "Iconophobia", which are also the most memorable of all.

At first listen, this might not seem as the best record ever written and it definitely doesn't have a protagonist role into the French scene, which has martyred some true diamonds of extreme metal. However, Vorkreist achieve the purpose they had set before it's release, to create a capable and robust piece that would remain good enough to make the listener dig it enough. It is mostly fast-paced, spitting nice riffs above the smacking drum lines, resulting in an enterprising effort that might not have specific brilliant moments, apart from one or two, but is strong as a whole.

Vorkreist would later go with a more characteristic playing, having members who are included in the top acts of the country today. Sabbathical Flesh Possession always pleases me with it's direct approach and solid musicianship, which provides the musical variety as well as the core of what I mostly enjoy in the genre, aggressive music and unfriendly atmosphere. It is not a whole view into the underworld, just a good glimpse.