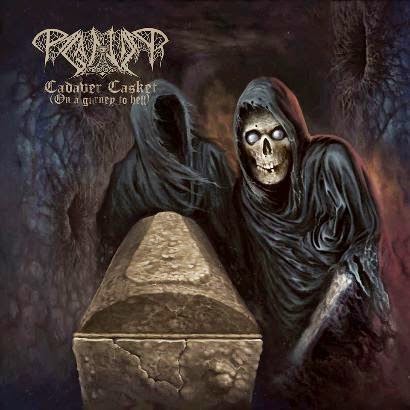 
Paganizer is the most characteristic band of Rogga Johansson, the man responsible for many extreme metal acts in the Swedish scene today. While all are inclined towards the traditional sound of their country, his inspiration seems to be never-ending and this EP was a direct sequence of their last album “World Lobotomy”.

The band’s sound has a specific wavelength and “Cadaver Casket” is exactly what one would expect, meaning direct Swedish death metal. The classic compositions with a fairly clean production and full sound, do not deviate much from the latest releases of the band and contribute one more mini album with more of Rogga’s music, which will not leave the ones who dig it any room for complaints.

Strangely enough, I liked this EP more than their last two albums, maybe because the original drummer Matties Fiebig returned to the line-up. The tracks here feel a bit more energetic than before and might be some of the best in quality the band has offered the last four years.

There is the horror movie picturesque both at the cover (a work of Daniel “Devilish” Johnsson) and the song titles, giving an even more beautiful facette to the record, which is intended mainly for pleasure and fun. Many bands continue what Entombed and Dismember began two decades ago, and Paganizer is definitely one of them.