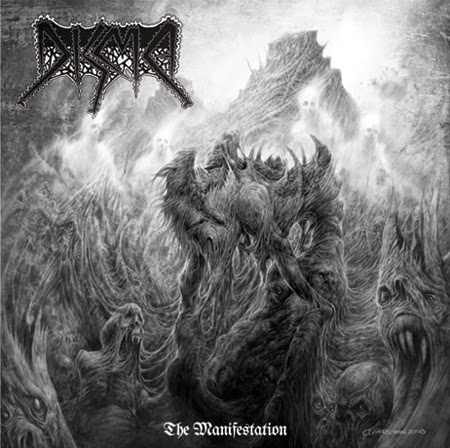 
In 2011, Disma went on with three releases, a split with Winterwolf, this EP and their debut full length Towards the Megalith. By then, all fans were possibly waiting for the full album when this arrived to their hands, which was a really good taste of what was about to come, but not much to deal with on it's own. Since Towards the Megalith was released about a month after this EP, it's not but a minor release.

The Manifestation contains two tracks, both of them were new back then and only one was used shortly after. The band still moved to the same pace as in their first demo in 2009, only with a clearer and deeper production (a main issue before, if you ask me). The tracks are a mixture of a fast and slow pace torment and the demonic vocals create one bit of an aura for death metal.

Even though they tracks are decent, I listened to this in a chronologically wrong way and it was already damned by the following release of the band, it felt a little bit uneccessary to me. Don't hesitate to check it though, especially if you're a fun of the band, as "The Manifestation" is only featured here.