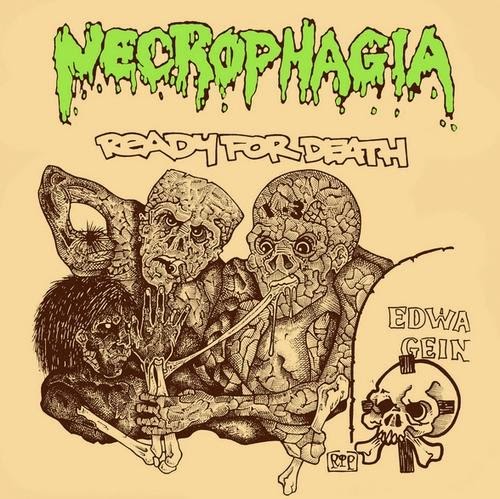 ~ Infecting thousands by the day ~

Necrophagia is one of the veteran bands in the genre of death metal, because they formed as early as 1983. The band also introduced the horror elements to their lyrics, a catchy subject later adapted by many a band, showing the efffect these guys had to this day. The band released their first and iconic album Season of the Dead in 1987, even though Ready for Death consists of even earlier recordings. The tracks for their second album, which was officially out in 1990, were actually made in 1986 and the label refused to release them. Now, why is that?

If you think other material by Necrophagia are primitive, wait till you listen to this. The barbaric sound of this bootleg album characterizes it's cult status as one of the sickest recordings of the genre, praised by the most extreme death metal fans. However, I don't want to give it more credit than it deserves, as it clearly isn't the best effort they have made and not the most influential album by them either. By 1986, it seems like Necrophagia had a relatively long way to go, which they wishfully did in a year before their ravenous debut.

The production of Ready for Death is up and down shitty, but not completely unbearable. Imagine listening to the first Impetigo records, but with a lot less grind elements. Labels often fought against the bands trying to get even more extreme because it was still uncertain economically and I'm glad these guys waited until Season of the Dead, which is an improvement in all aspects. Necrophagia's style is not yet distinctive in Ready for Death, as there are plenty of thrash metal elements, along with a bit of black metal in the vocals, as they are similar to early black metal recordings of the late 80s. I guess all extreme metal was one back then.

The compositions feature a couple of pure death metal riffs here and there, but mostly are an unsteady blend of playing with not much to give to the listener of today. In fact, there is often a jam rage, with repetitive high hats and shreddy riffing, making the songs even more fuzzy. Ready for Death is not an album for purely musical interest, as it is more agressive and unfriendly, especially for it's time. Apart from that, the album will be an awesome ride for fans of dirty death metal, early grindcore, goregrind or anything similar. The lyrics are graphic enough, at least the ones available.

Two tracks were later used in Season of the Dead, "Ancient Slumber" and "Mental Decay", while the rest of the tracks were used in a compilation released later in 2000 titled A Legacy of Horror, Gore and Sickness. Necrophagia's Ready for Death isn't that special, being an early and sloppy recording by the band. It could easily be their debut record but it seems fate was on their side, offering a more complete work only a year later. All Necrophagia freaks out there need this too though.

The name on the grave on the right is Edward Gein? Great.

Facebook | Bandcamp
By VJ-atyc at June 14, 2014
Email ThisBlogThis!Share to TwitterShare to FacebookShare to Pinterest
Labels: Below Average, Death Metal, Necrophagia