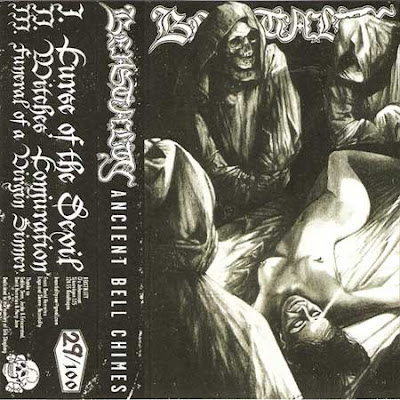 I almost check Swedish death metal bands blindfolded, in case we're talking about old school fanatics instead of the Gothenburg scene, which is cool but not as cool, let's be honest. Constantly searching for new bands, one is pleased when one finds a legit Entombed copycat, always having the desire for originality as a secret wish on the back of their mind. Now, you can't tell Beastiality from Stockholm completely innovative, but they do sound like themselves in their first ever demo, Ancient Ball Chimes.

The production is really dirty. The instruments sound dusty, the drums are hidden behind the buzz and the vocals are a mix of growls / screams / whispers, something from the depths of hell, worn out and rough. However, everything is pleasingly audible and the noise is deliberately channeled towards building a thick layer of a stenching rabble, totally raw and haunting in it's entirety. The demo grows in you the more you listen to it, provided that the necessary time is given to it.

The concept of the band revolves around witchcraft, Satan and morbid subjects, which gives them a more occult label compared to the classics of the scene. Ancient Ball Chimes is generally more malefic than the average death metal record, with a furious pace that doesn't really go into the doom department at all. The three songs included in here offer a total of thirteen minutes of music, containing a bunch of melodies and a few samples for you to grasp on while trying to choose your favorite track off them. For me, the standout track is the last "Funeral of A Virgin Sinner", since it has an awesome bell intro (I have a thing for church bells, I'm sorry), really interesting and dark riffs, but most of all, a peculiar clean vocal scream towards the end, that sounds a bit distorted even for  the underground heavy metal standards.

The demo is very close to black metal aesthetically as well as musically. In fact, I was thinking of early Bathory throughout the whole recording, especially in the first song "Curse of the Devil". Given that these guys come from the same country, it's more than logical for one think that they are influenced by the first Quorthon era. That's probably the reason why it's not pure death metal like other Swedish bands, drawing influences from two different genres. Generally, I would place this as a combination of early 80s black / thrash, combined with the first wave of black as well as Swedish death, with equal doses of the first two and a larger one of the third.

Ancient Ball Chimes is for the lovers of extreme metal demo recordings. The band has produced it in a way that it's personality does not drift away while it unfolds and it has a respectable degree of quality, touching various underground genres in various moments. I'm going to look out for these guys, hoping that they will record and release a full length album anytime soon. Until then, I guarantee that they deserve your attention.