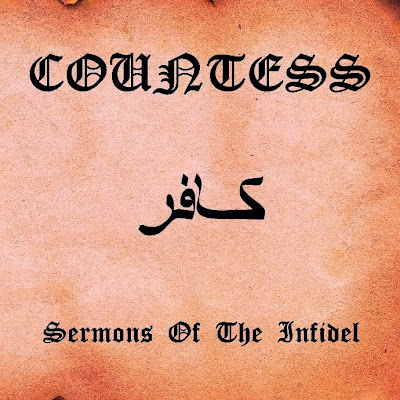 Countess have a huge history and discography behind them, rooting back to the early nineties and the beginnings of the second wave. With medium ranged but steady and solid albums, it's a band that has lived in the underground for more than two decades and the mastermind behind it, Orlok, still has some ideas to put into practice. My first experience with the band was when I found their first four albums, back when I was listening to any black metal release of 1990-1995 I could get my hands on. They were a bit unstable musically, but he managed to snap out of the fatigue and release some really good albums in the mid 2000s, like Heilig Vuur and Blazing Flames of War. I still need some time to examine all his albums more closely.

Sermons of the Infidel is the latest EP by the band and it was released in the early summer of this year, as a digital release. I think it was only released digitally because of the missing budget to finance physical copies, but it doesn't matter that much to me. Despite being an EP, it's thirty five minutes length could easily fit for a full record release of a regular band, but not Countess of course. Orlok chooses to release full lengths that feature over an hour of music at least. Nonetheless, a booklet of the album is included in the digital purchase. It's also not completely an one man project anymore, since there is another member named Zagan that plays the guitars (he has helped the band with albums before).

The production here is pretty gratifying and by no means noisy. It sounds polished and warm, keeping a specific tone over the album which is not comparable to shitty recording by an obscure black metal band. The drums, the guitars, the vocals and the bass are highly audible, allocating the listener with a legit result that gives the music the space it deserves. However, one can say that it is a bit overdone with the mixing, as it's almost sterile as a whole and lacks any ounce of dirt that some fans actually crave for. A lot of work has been done in the studio and this production fits to the essence of a digital release, as it relegates to "digitalized" sound.

The tracks of the record represent very well the uncompromising playing style of Orlok, which can not be labeled in one specific genre at all. Paying respect to the old underground attitude and classic black and heavy metal bands, Sermons of the Infidel includes simple compositions of lot's of guitar riffing and synths, the two main elements of the record. One can listen to various styles and subgenres of metal in there, knitted nicely by a really talented musician who knows what he's doing by now. Listening to tracks like "Child of the Millenia" and "Son of the Dragon", you can't directly match it with another band and it just sounds like Countess, proving it's originality even after many years.

A component that does not go completely well with the shiny sound is his vocals. Coming from the extreme underground, Orlok still possesses a harsh and ominous tongue that spits his anger perfectly, but with the instrumentation not following the same menace, it sometimes fail in delivering. It also doesn't serve the more heavy metal driven moments of the albums like in the song "Chosen by the Gods", which im my opinion, would be great even if it was an instrumental track. The record is generally middle paced and the total of eight songs go from three to five minutes, focusing on building up atmosphere and melody over than brutality.

The two tracks that I think are the most memorable and stand out on top among the rest, are the first two. "Hymn to the Gods of Yore" has an awesome synth line and great lyrics, as well as very good melodies for you to enjoy by the time the album opens, since it's also the first track of the record. The second "Trumpets of Dawn" contains a couple of very cool riffs and a more nostalgic synth part in moments, as well as a melodic solo towards the end. I could not find the lyrics for this or any other track of the album except the introductory one, but still the vocals are distinguishable for the most part.

In general, Sermons of the Infidel is a nice record with the familiar Countess feel. It's easy to reach to a conclusion of disliking them because of their character, but after a couple of listens it's easy to recognize some things that worth the listen and even if it's not a full album, it does show what the band sounds like today. I myself enjoyed a couple of tracks a lot and I think this combination of black and heavy metal is meant only to serve underground quality music and nothing more. For newcomers, I suggest you get a taste of their first albums as well and then go into this, there is something for everyone in the box.