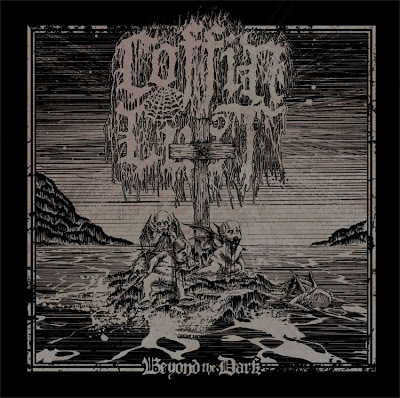 I have to admit, that I have connected Australia with the hardcore / whatevercore scene in general and not with much activity outside that whatsoever. Of course I'm wrong and there are numerous, obvious exceptions, but still there are more than enough bands like that over there. However, Coffin Lust come from Victoria with a first demo that seems to be very close to traditional, solid and appreciated death metal, simple minded and yet very beautiful in execution. The record contains four tracks of around three to five minutes in length each.

Musically, the band uses catchy riffs straight from the nineties, as well as regular drum patterns behind each track, followed by the present but a bit quiet bass work. A highlight of the demo is the vocals, which are straightforward caveman growls, similar to these of classic death metal bands we all love. The production is amazing and equal to one of a full length, offering a polished and powerful sound.

In the veins of bands like Autopsy, Bolt Thrower or Grave, these guys avoid pointless technicality and aim high with slower and more hurtful compositions, creating a both brutal and evil outcome. he band doesn't have it's own sound completely, but in a way it produces something above average, somewhere between old school death metal and doom / death, with hidden highlight moments like in the tracks "Fading Life" (which begins with a cool sample of wind and a church bell) and "Forsaken". The closing "Beyond the Dark" is as fast as they get and it's fanatical about it's roots, also a wonderful song.

As a debut demo, it's legit and very promising for what's going to follow in the future. The demo was originally released on tape but the copies were sold quick, so a second CD press was released a bit later, in a remastered version. The remastered tracks sound a bit cleaner, but only towards a better result.