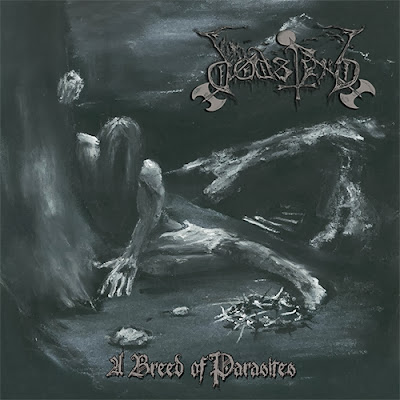 A band with a history and a serious name inside and outside the national borders, Dodsferd are one of the most notorious acts from Greece, who has been spitting aggressive anger for more than ten years now. Their anti-human concept and direct music is generally appreciated by the fans and their name often comes up in conversations about suicidal / raw black metal, therefore they are a band to look out by definition for me. From what I have listened in the past, I don't think their are albums are more than average or over the top, even though I have an urge to listen from time to time.

What is more, 2013 seems like a really active year for the band, since two splits, a compilation, an EP and this full length were all released this year. I gave this a head start since it's the full record of the year and it was not the kind of black metal they used to play after all. The band has taken a turn into something more melodic and atmospheric without losing it's depressive subject, while absorbing ideas from genres like post-black or melodic black, as well as dark ambient / noise. The outcome is very solid and interesting, with a fair dose of originality.

A Breed of Parasites contains eight compositions with a total length of thirty two minutes, including a nine minute cover of the song "Eternal Bliss... Eternal Death" by Judas Iscariot. Meaning that the new music included in the album is a little less than twenty five minutes, not very long for a full length album and insufficient for many. I would not hesitate in naming this a full length and I believe it's more of an EP, even though the issue doesn't effect the quality at all. Dodsferd are coming up with a bunch of releases (including the The Parasitic Survival of the Human Race record) and there is plenty of material available. I would prefer a longer album just so I would listen to more of this.

Listening to it, one comes across a rather unusual track arrangement. There are two long tracks, lasting 8-9 minutes, along with the Judas Iscariot cover. In between, three instrumentals have been placed, each one relatively shorter and vocal-free, like the typical interlude used in the middle of various records. When other bands include one interlude in a ten track album, Dodsferd choose to include three of them in an already briefer package. The ending of the last track is also a 2-3 minute ambient piece, which makes this album almost half black metal, half dark ambient. Not only does it work, but also it is successful at preserving the listener's attention.

The instrumentals are legit and compelling, showing a talent of the band in creating a dark atmosphere with synths. The opening track "An Unbearable Pain" contains a repetitive guitar note with scattered sounds behind it, while a great couple of synth lines is played towards it's and. Track 3 "... Til the Day You Die" is more minimalistic and shadowy, close to drone / noise and track 5 "The Burden of Feeling Alive" is strongly bleak and dispiriting. It would fit for a noisy intro of an old Shining record, having a depressing melody and various noises that can play mind games with your head if heard too carefully. In other words, sheer awesomeness and success.

I'm satisfied with the black metal part of the album as well. The tracks have variety, they are well composed and in very good shape, when it comes to the sound. The album is glistening enough as much as a record of modern black metal does but it doesn't abandon it's past completely, don't expect a family friendly record. I enjoyed the solos of the tracks and the attention that has been given to them not only by the guitarists Nadir and Wrath, but by the compositions themselves, which are not chocking them out. Another aspect that brought up Shining to me, especially the solo part in "Burning the Symbols of Your God ". Even the cover is executed in a personal way, adding some ambient in the beginning and giving more emphasis to the already existing synths. Finally, I feel obliged to leave some credits for the vocalist Wrath, as his howls and screams are just glorious.

The band experimented with A Breed of Parasites, integrating heavy ambiance into their tracks and the record as a whole. The change was a certain risk to take, given that the followers of the raw black metal scene are never satisfied with anything clean or melodic, but still the band came through and put out an album worth listening to. Now, if this had a couple of full tracks more, reaching 45-50 minutes in length maybe, it would definitely be a remarkable effort by Dodsferd. At least, it's one of the releases I have enjoyed the most by them so far.