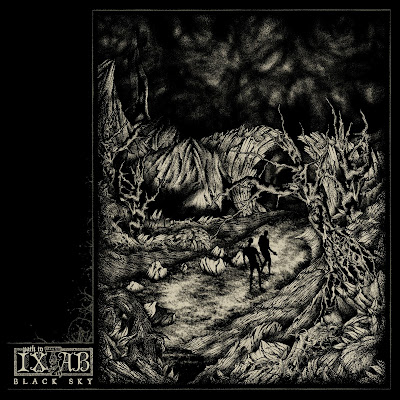 Path to Ixtab are a newcomer band from Greece that was formed in 2012, consisting of two members, one of them also involved in the stoner / doom act Brotherhood of Sleep. They have not built their own fanbase quite yet, even though it seems like a well organized and serious band, already in a label and with a debut full length for a taste of what they are doing here. One would quickly notice the lovely cover art done by Antreas Admc07 (reminds a bit of the new Lantern album art) and the artistic logo of the band, which makes it even more interesting when getting into the music of their record Black Sky. The album contains eight tracks and lasts thirty eight minutes.

If you expect some bestial, dirty black / death like other bands I review from time to time, you're way off on this one, since it has nothing to do with that style whatsoever. What we have here is a middle paced, calm and easy going metal album, with a little harsh vocals to remind of it's aspirations and hardly any breakthrough moments as a whole. The tempo of the album is kept at the same, average level (with very few exceptions, like the track "Axe In Hand" that actually reminds of black metal), which implies that  the band tried to create a certain atmosphere but didn't go anywhere, since the tracks are based on weak and illusive ideas. Eventually, the same tone of chafing noise grows more boring and nonchalant, leaving the listener waiting for signs of anything interesting apart from the looks.

As I said in the beginning, it looks like the band has taken this project seriously and that is obvious from the production of their album as well. It was carefully mastered, so that every instrument has it's way into the spotlight and the sound is generally friendly and listenable, but still it can't revive the corpse of the incurious music. To me, it sounds like Serafim (the guitarist and vocalist) brought his stoner touch into this new, darker project and injected them into an already fragile compositional structure, making the album sound incoherent and apathetic. It is described as black / death metal in Metal Archives and various other sources, yet I'm having trouble discovering any death metal elements at all.

In the band's line up, there is no one playing the bass, I assume they don't use it at all and I miss it. While it's often that the bass sound of the band is not directly audible, it serves it's purpose very well on creating a background layer that fills the possible holes of the guitars and drums, which are left wide open here and turn out to be very hurtful to the album. The musicianship is not anything special as well, with dull melodies and conventional, soulless drumming, followed by the average kind of shrieked vocals. Black Sky sounds forced and harmless. Like these dudes are kept back, afraid to play as hard as their genre sounds like, with nothing to offer at the end of the day.

Frankly, there are no standout tracks. I would only point out a couple of parts in "Axe In Hand" where it gets a little bit lively, but that feeling quickly vanishes when the music returns to it's original state of hibernation. In fact, there are two tracks named "Prayer 1" and "Prayer 2" that include something like a chant, and the Greek accent of the guy makes it hysterical to listen to. It is a defect of the album, since it make it even more unattractive than it previously was, it doesn't sound sophisticated or dark or anything like that. It's lame. Bashing a new band like that might not be totally correct and I don't usually do it, but I personally think it's not right to approve of any nonsense band just because they're still "young" either. I'm almost annoyed by this album and hope things will improve for the band, the two guys should sooner or later find each other in the process of the song writing, and avoid any blunder albums like that in the future.