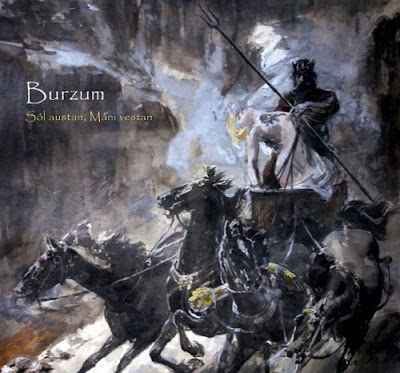 Burzum albums have been dropping like bombs since he was released from prison, tools to express more and more his views on faith and life. Recently, he's been doing some photo shoots with armor in the woods and everything, what can i say, they are hilarious to my eyes. I also like RPGs and strategy games more than any other game type, but please. He has informed us (and stated numerous times in interviews) about how he doesn't quite fit in the modern society, i swear i've heard it before, can't recall where...

So, the new album is this:
Sol austan, Mani vestan" will feature almost an hour of instrumental electronic music, that can best be described as relaxing, slow-paced, contemplative and very much original. And of the concept Burzum says; I have still not been able to leave behind the Pagan religious-spiritual concept of a descent into darkness and the following ascend back into the light; the Pagan initiation, the elevation of man to the divine, the enlightenment of the mind, the feeding of the elven light in man.
(by Varg himself)

I understand that it is more than music, but i fell asleep in the first track. This is too calm and too weak ambient for my likes, i was sitting there waiting for something to happen in my ears but nothing did. Im not saying its a bad album, all im saying is that i clearly can't understand the concept and the purpose here, he must have deep meanings behind these goodnightsleep compositions. More ideology & less music, that's what im receiving from this guy lately.

Either we like it or not, Varg is doing whatever the hell he wants. No one can say he has gone mainstream because he clearly does not create mainstream music, he is not a rich black metal superstar, he just live an awkward life that we choose to laugh at. Or some of us. He still remains one of the most important people in the black metal scene that actually witnessed and created its birth, when the genre did not even exist. Anyhow, i think he should take a break from releasing albums.


DAMAGE: [3.0/10]
at May 20, 2013
Email ThisBlogThis!Share to TwitterShare to FacebookShare to Pinterest
Labels: Ambient, Burzum, Pagan Ambient, Quite Bad