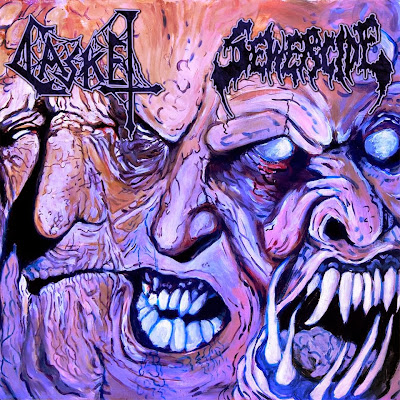 Here's a collaboration between two underground thrash / death metal bands, Casket from the US and Sewercide from Australia. Each band takes it's first steps now, without any full album yet and few stuff for someone to listen to by them. This new 7" split contains one song by each band, even though they are very much alike and could be easily be two songs of the same band. The winning cover was designed by Kator.

By the description of the release in Bandcamp, I was expecting some kind of raw death metal but don't let their words fool you, there is nothing death metal here apart from a couple of growls by Casket. Both bands stick to old school thrash, with a regular musical structure and somewhat poor production. The result doesn't move the earth, but it will be appreciated by metal jacket freaks.

The first song by Casket "Armed to the Teeth" moves into a fast tempo and has groovy riffs, without any astonishing moments, as it seems like they're replaying what has been on for the last thirty years. It has cool, shrieked vocals and a nice vibe, even though the high hats are mixed too loud throughout the song. It ends with a spooky laughter, which is more funny than serious. Sewercide continue with a similar sound into an equally fast song, with repetitive drums and tastier riffs / solos and vocals than Casket. I can't say any of the two tracks featured in here is memorable.

I sense I would not bother listening to this if it didn't have the amazing cover. For fans of the genre, this is for you, even though I assure you that you have heard it before. Each band has legit musicians but hasn't formed a personal characteristic in their music yet, and that's very obvious in this record. Still young, way to go.