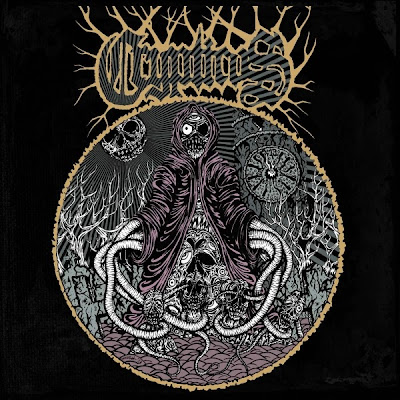 | The clocktower chimes the 13th time |

Crypticus is yet another band that leans towards horror concepts and riff based compositions, creating average but enjoyable albums recommended for any age. Even though there isn't much going on when you're listening to them, it doesn't feel like they're doing something wrong, but more like they aren't doing something special either. The Barrens is their third and latest album to date and it offers some really tasty grooves, as well as occult aspirations, and that's about it. Apart from a couple of great moments, I didn't find the album that fascinating after all.

The band consists of two guys and one of them is a Norwegian dude that has experience with bands like Megascavenger and The Grotesquery, stepping into the realm of Rogga Johansson and his countless projects. Crypticus seem to be influenced and have some characteristics of that part of Swedish death metal, mainly because of the lyrical theme, the general aesthetics and the stomping riffing attitude they have. The Barrens contains eleven tracks (and a bonus one in physical format) and lasts thirty four minutes. It sounds like these guys have laid back on the already known recipes, comfortably recreating them with a few personal additions and little spirit to present, as if they know which notes to play, but not why they should be played.

My first objection on the album is the gargling vocals. While it seems like they're decent growls, they don't sound painful or staggering at all, delivering some kind of boredom from the vocalist who was eager for this shit to get on. I can't call a growl decent, especially when it doesn't have the power and the intention to dominate as a main part of a record like that, failing to draw any attention as the listener focuses more and more on the rest of the instruments and eventually on nothing at all. If you listen to each track closely, you get the feeling that the vocals were recorded in a low volume which was courageously increased to catch up with the overly boosted guitars.

Which brings me to another weak point of the album, which is the production. I don't like the way it has been mixed, erasing any signs of bass, squashing the drums into one-dimensional, fake sounding hits, dragging the vocals on the top and the guitars right behind them. From the first songs, it's obvious how the toms have been strangely altered into click sounds while the snares and high hats are notably cleaner, a common result of sloppy production, which would not be such a deal if the album didn't have all these blast beats. They are capable of giving you a headache for that reason and The Barrens is full of them. The drummer goes for solid musicianship and does whatever possible to accompany the songs, but his partial success is clouded by the annoying sound they later arranged in the studio.

On the other hand, the guitar work is splendid. The tracks have great melodies and great changes, as well as some exciting solos. For the most part, the album is suitable for drinking and headbanging, insinuating the use of bulky riffs in it's entirety. Specifically, I enjoyed "Together Towards Terror", Being the best aspect of the whole thing, it's what makes The Barrens a little memorable and the reason it was kept alive in my head, for a little while, after it finished. The band also uses a bit of synth lines in a couple of songs and in the introduction, accurately and correctly used to add to the horror vibe in tracks like "Necronom IX" and "Misanthropy Mine", the latter being the standout track of the whole album.

I believe the album will be an attraction for a significant part of the scene and it will generally get positive comments. However, it's fragile sound and disturbing vocals overthrew it into the dumpster and I'm not coming back to it any soon. If this is what the band had to offer five years after the release of their previous full length They Called Me Mad!, I am not impressed at all. A nice cover, some solid lyrics (and parts of them taken as quote texts) and regular jamming is not enough for me, and me only. I encourage you to listen for yourself and you might find something in there, it's not completely drained.