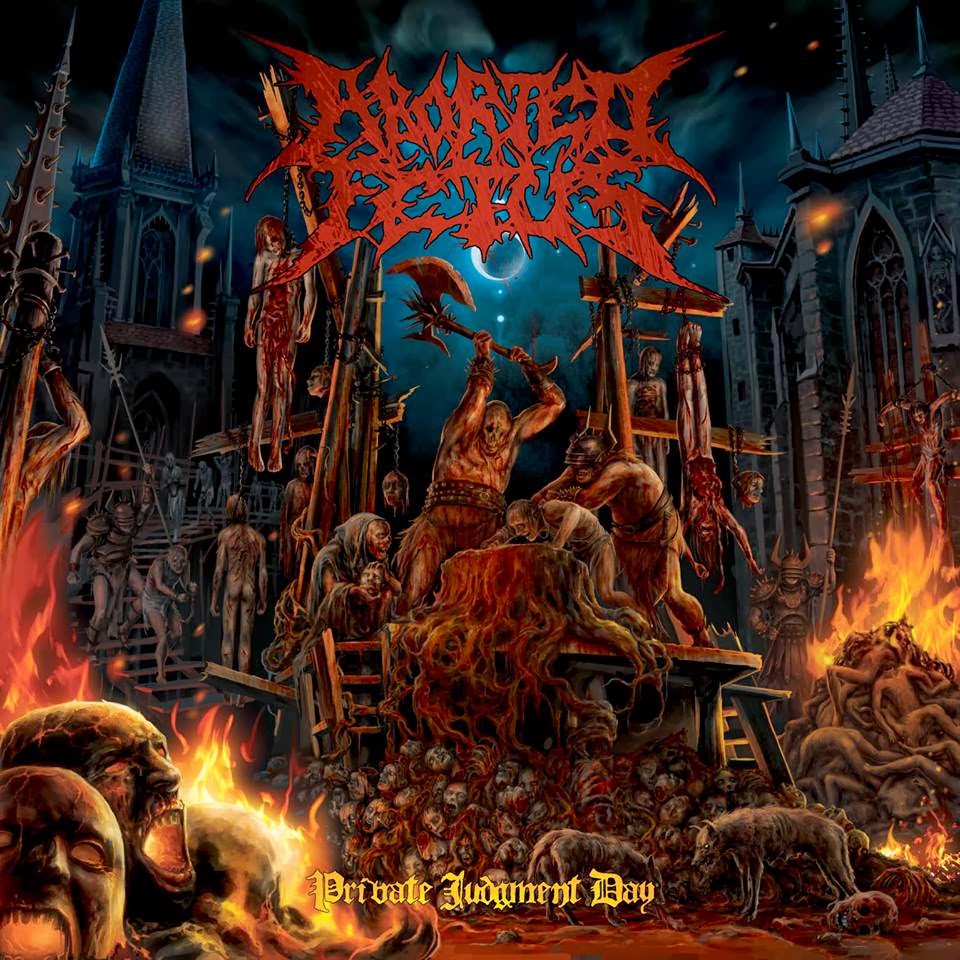 I found out about Aborted Fetus from an old forum I once frequently visited in a random conversation about metal genres, back then I was into such bands mainly because of the titles and the artwork, more than the music itself. It is true that I prefer other Russian bands when it comes to brutal death metal, like Abominable Putridity and Katalepsy, but these guys also come to mind now and then. Therefore, I was looking forward to listening to this album, even though one knows what to expect from it, especially when one has heard a band's previous material.

As most of the bands alike, Aborted Fetus are all but slams, groovy riffs, blast beats and guttural vocals. Coming with a delicious and artistic cover, which represents the usual chaotic gore apocalypse we know, it's title and song titles are not extremely disgusting this time, compared to some of their past namings (if you can't stand these ones, don't go anywhere deeper into brutal death, really). Of course, there are "Fuck in the Pesthole" and "Malignant Pregnancy" which suggest of something, but the average title choices are ok. In fact, Private Judgement Day could be any band's album title. Even though most bands go as gross as possible, Aborted Fetus keep it close and stick to their brutal music.

Fans of the band and the genre are probably going to dig this hard, because of the same reasons they enjoy that style. Aborted Fetus know how to hammer tasty grooves in your face and it's heavy as it needs to be, at it's comfortable and cozy DR4 production, the most common outcome of the whole genre. For that, the production is pretty jammed but nobody would even care to notice. Private Judgement Day has a relatively riotous sound, without being the unbearable kind of noise necessarily, similar to their previous full length Goresoaked Clinical Accidents, and slightly worse than Fatal Dogmatic Damage.

Musically, the band is just pure brutal death metal. There are a couple of screaming / horror samples in various songs, as in the very beginning of the record with "Savage Dominance", and also in "Private Judgement Day", "Brown Totem" and "Morning Inferno". Such samples have always appealed to me a lot, sometimes more than the rest of the songs, and I expect to hear one or two in every record like that I get. The drums go quite fast and repetitively throw several combined hits, while the guitar work uses the absolute basic characteristics of the genre to build compositions. The vocal range includes guttural, growls and often pig squeels. Don't expect to understand the lyrics, if there are any.

Private Judgement Day contains twenty five minutes of what Aborted Fetus do best and it's not expanding anywhere further that, to be sincere. It would be an enjoyable listen and a really good album for die hard fans, or people who can keep up with just brutality in their music. I like my brutal death from time to time but I consider it somewhat inferior to actual straightforward death metal, so an average or even a considered good band won't move the earth at all over here. Still, it's a legit album as a whole, quite attractive to a certain kind of fans.