Gorgoroth - Destroyer, Or How to Philosophize with the Hammer (1998) 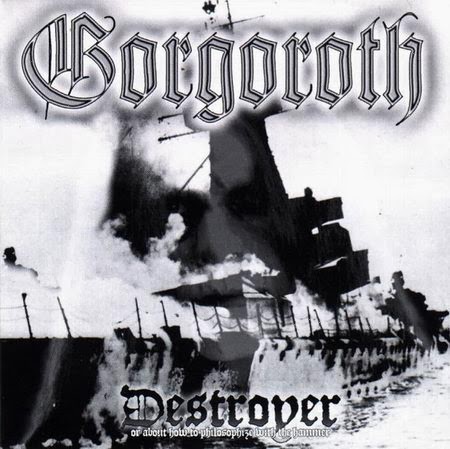 I'm not always against bands going very popular and I don't bash them for that single reason, still I have come to mind that Destroyer, Or How to Philosophize with the Hammer is one of the weakest moments in Gorgoroth's carreer, shattering it's potential and the possible status it should have achieved. Signing to Nuclear Blast was a first questionable deed, since they are suspected for eating artirts from the inside, even though the name of Gorgoroth had already been promoted a lot by various popular sources. After several listens, I don't know if it's as bad as Under the Sign of Hell but it undulates around that rank, without reaching very high in my interest meter, so I consider it a letdown.

A major drawback of the album is it's poor production, which characterizes it's weakness to deliver, even when the music goes through some notable moments. It creates a sterile and puzzling sound that doesn't have a healthy balance between the vocals and the instrumentation, as well as the extra keys that have been added in various tracks, which are completely buried or just glitches in seconds. Sometimes, the random growls and fast cymbal hits don't make the guitar lines recognizable at all, resulting in a black metal / noise, dreary travesty, ruining completely the outcome. This can be mistaken as a choice, something done on purpose, a message from the band of it's obscure attitude and unearthly sound, but not all noises are melodies.

Examples of the previous statement exist everywhere in the album. From the very beginning, "Destroyer" starts with a massive instrument hammering intro and the signs of a musical structure begin to show thirty seconds later, where a riff emerges from the overall randomness. It's the only track Gaahl sings to in the album and his vocals are pretty decent, especially during it's second half, even though the song itself is tiring. More random samples come along in the third track "The Devil, The Sinner And His Journey". Here, we are introduced to Frost and his great drumming style, which is also the only above average track in terms of the drums, as all the other are the typical necessity. Yet, it ends abruptly and has various key lines (played by Daimonion of Enslaved, probably) that seem like an experimentation, without fitting at all to the music.

Furthermore, the sixth track "Blodoffer" is just horrible. It's as simplistic as it can be, it has some awful sound effects behind it and disgusting retching vocals that conclude to one of the worst songs in the album. I almost thought it was a joke when I first listened to it. It's an ongoing, monotonous piece of trash. Sadly, the Darkthrone cover they did of the song "Slottet i det fjerne" should also be considered as an attempted rape, it's really bad. If I wasn't aware of the actual, I would not have cought a single riff in there, it is shadowed by the same problems of production and sound, as the rest of the album. "The Virginborn" is a slower and longer track (lasting eight minutes) which isn't much of an activity, but it's generally listenable.

On the other hand, the few legit moments of Destroyer are basically the tracks "Om Kristen Og Jødisk Tru" and "Open The Gates", which have an old-school black metal feeling, lacking the various annoying elements and keeping a good riff or two as a core. I didn't expect to like the epic clean vocals in "På Slagmark Langt Mot Nord" because I hated them in Under the Sign of Hell, but they seem to work out well here. All in all, the music in Destroyer is not at all good and it often shows or unstable songwriting. Could it be that so many people were involved in the album? The main part was written by Infernus and Tormentor, but different musicians are playing different roles in different tracks and that formula rarely works to me.

The origin of the album's title is not hard to guess, as the book Twilight of the Idols, or How One Philosophizes with a Hammer by Nietzche has the same title. It is the same fucking title. If these people were so influenced by it, at least think of your own sentence, it's not that difficult. Everyone knows how staggering huge album titles are, and they leave very few to the imagination. Gorgoroth later took the first half of the book "Twilight of the Idols" to use it in a later album in 2003, thinking that by adding another phrase it would get more original. I don't like it when bands do that and it's not a healthy influence process. Of course it has nothing to do with the music, but it does to the overall worth of the album.

In overall, I think this album does more harm than good to the image of the band, as for the artwork, the music, the line up and the subject itself. They tried new things with new people and that by definition demands more time to work compositions, so a year after the previous full length was rather a hasty and sloppy decision, to release a sloppy album. I would say Destroyer is boring and sometimes bothering to the ear.