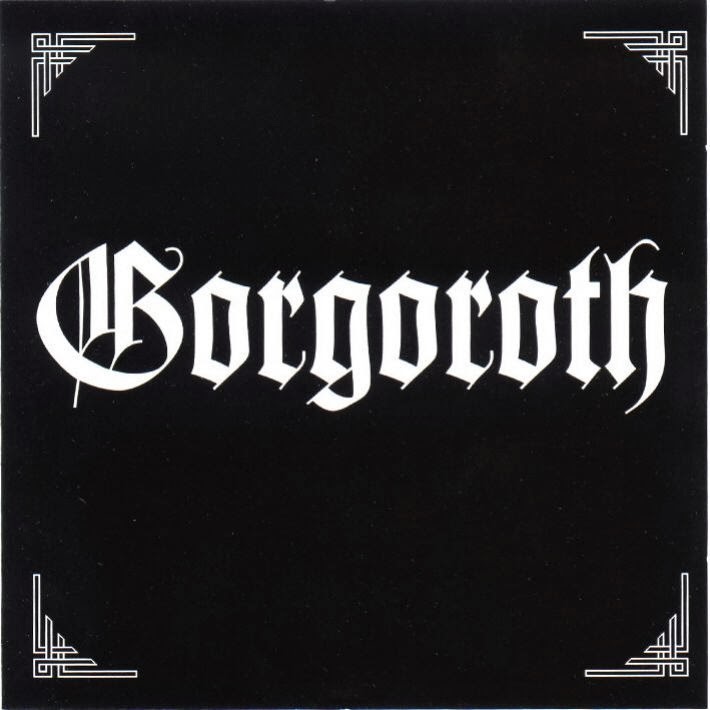 The first, stenching step of this gargantuan band grew it's roots during the early nineties and it perfectly symbolizes that period, which saw the birth of many crushing, life changing albums. Apart from Pentagram, not far away from Gorgoroth's headquarters, other albums like Dark Medieval Times, In the Nightside Eclipse and Transylvanian Hunger were released the same year, marking the genre's peak with fire, so that it lasts forever. To this day, I strongly believe that the menacing debut of Gorgoroth is their most unique album, as they are one of the bands that fell victim of the media and the shape it gave them the later years, so that they would become an accepted extreme metal act. This record shows the band's primitive aesthetic, building chaos and extracting the members' hating hunger, as it existed back then.

Even though the band is mostly connected to Gaahl, who is their breakthrough frontman and one of the most popular figures in black metal, he was not part of the group on the Pentagram sessions (as he joined them in 1998) and he didn't participate in this album. Instead, Hat handled the vocal post, who was a founding member. A dude with the simple pseudo Goat played drums, who had also taken part in the early demos, while the infamous Samoth of Emperor handled the bass. Of course, the mastermind behind the music on the album was Infernus, who was the guitarist and the main composer, the one who is to be blaimed for this extraordinary record, a proud jewel of Norwegian black metal.  Gorgoroth had their time with various band members in their early days (Satyricon's Frost played the drums in their second album Antichrist) but it wasn't until King and Gaahl joined, that the band wrote success.

Pentagram is brief and precise. It consists of eight three to six minute tracks, keeping the variety of the instrumentation elementary and as raw as possible. It's compelling sound caresses the ears with it's thorny and devastating essence, diving under the flesh of the listener and subjecting them into it's horrible and gruesome beauty. Rather short, almost reaching half an hour in length, it's over before you know it and seems like an obscure dream or a blurred journey through time when it finishes, as you have just tasted a nominal piece of art. There is an excellent flow between the songs, which are well written, quite aggressive and far from repetitive, giving glorious space to the personal style of Gorgoroth in this album. When it comes to the second wave in Norway, it is to me the time up until the middle nineties, before getting huge attention and countless bands and the first two Gorgoroth albums are a part of it.

The production of the album is sincere, lively and dynamic. It's healthy and possibly very close to what the band played back then, which means that the studio didn't ruin all that is good for a cleaner sound. In fact, all the instruments are nicely audible, always giving a heads start to the stomping guitar sound and the vocals. The drums sound very energetic as well, keeping the pace and the rhythm going in every track. Pentagram is dressed in simple black, with only a logo on the cover, following the "fuck the trendy well drawn cover artwork" attitude and that only adds to it's glory, being among favorite unholy gems. Not a lot of albums nowadays have that kind of originality and vibe as this album, as it grows on you the more you listen. The Gorgoroth of 1994 were boiling fury and disgust, they had time, appetite and the vision to create music.

Not enough credit can be given to the contribution of Infernus to this record. His ideas on the guitar are breathtaking, as it's a bombardment of excellent riffs during every track and hardly any filler or boring moments. Seriously, these riffs right here have life of their own and they are blood thirsty, defining the whole album's outcome. If I should describe them in a few words, I'd say uncomplicated brilliance. They are not difficult to digest at all, yet they are masterfully played and well structured, so that monotony is completely out of the table. It sure is one of the best times he had with the handling of the compositions, as there are very few riffs as compelling as in "Crushing the Scepter", the following and painfully slower "Ritual", "(Under) The Pagan Megalith" or the magnificent "Mooneskyggens Slave" (=Moon Shadow Slave..?). As I said, apart from a couple of church bells, there are no effects or samples, introductions, that's why the main part of the synthesis is so powerful.

Listening to Pentagram, one won't leave the suffering vocals of Hat unnoticed. Another trademark of the album are these suffering and agonizing vocal lines, having Hat literally screaming his throat out with the supreme performance. Somewhere between regular shrieked vocals and distorted high pitch yelling, Pentagram's voice is equally malevolent and relentless. The words are not distinguishable at all and it seems like they are nowhere available, maybe because of that matter or just because the band never wanted to release them, since it's hard and not needed to sing along or guess the lyrical concept. The band kept a satanic character from it's beginning, despite the fact that it went a bit off track later on, so it's not hard to guess the lyrics here revolving around anti-religion, nature and Satan. Such vocals might drive away people who have not listened to the genre or not know a lot about it, which by the thought and only, brings an ounce of euphoria.

It's a pity of the path this band decided to follow after a couple of albums, which is shadowed by idiotic right fights, too much media exposure, bold and daring statements, and of course, some pretty shitty albums. Even though I enjoy Gorgoroth as a whole, I find some aspects of them hysterical (and by no means I refer to Gaahl's homosexuality). Nonetheless, they are among the biggest bands of the genre and their first album is the definition of true black metal, a term that has been raped so violently over the years, that it's a joke today. Pentagram was a promising start, it's full of awesome tracks and it stands for what is beloved and missed in the scene.