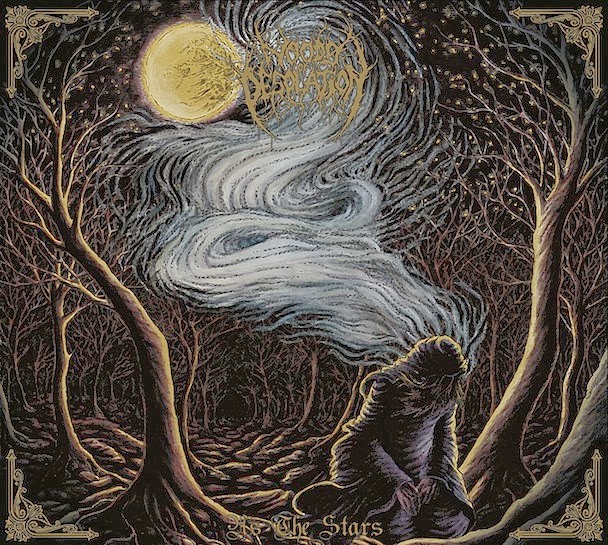 I always thought of Woods of Desolation as a top depressive black metal act, ever since I found them with their obscure split with Drohtnung in 2008. They have been playind DSBM in the debut full length Toward the Depths and in the Sorh EP, which might not have been the best the genre has seen, but still it was pretty decent to my eyes.

They changed into something more atmospheric and released the phenomenal Torn Beyond Reason, which had an incredible impact on me. Now, the band makes progresses a little bit more and releases the legit As The Stars, in the vein of the modern atmospheric / post-black metal scene.

While the main member of the act is D., there have been guest musicians helping with the writing and recording sessions. So it was done here and there is Old of Drohtnung contributing with his vocals, Vlad from Drudkh in the drum post and the bass player Luke Mills, who also plays in Nazxul and Pestilential Shadows. Unlike other bands, this record was written by all the guys together and it was not strict compositions given out by D. only to be reproduced by the rest of the musicians. Every man has offered his part in it's completion.

Woods of Desolation had never tried recording lot's of average length songs before, as there are seven four to six minute tracks here and that's somehow unusual, especially compared to the long hymns of Torn Beyond Reason. They have become more accessible that way, as each track is reduced to a simplistic verse of parts and a couple of changes, if there are any. As The Stars lasts thirty four minutes.

Musically, it resides in post-rock melodies, dreamy riffs and mellow atmospheric black metal. As they are located far away from the Cascades, they are not completely following the lines but it's basically what one would expect from such bands after discovering Alcest. In fact, you can hear that band in the introduction of "Unfold" or "And If All The Stars Faded Away", As The Stars feels like a b side of a post-black era Alcest record.

Old sings with passion and despair at the same time, with his voice reaching it's highest peak in tracks like "This Autumn Light" and "Withering Field". His vocals are distant and eerie, wonderfully melding with the rest of the instruments. The drumming is rather simplistic and not given more attention than needed at any moment, so I guess it would go unnoticed in the album, apart from sparse moments.

As The Stars often changes mood during it's set. While the album opens with a fast (and the most intense it would ever go) riff followed by the harsh vocals in "Like Falling Leaves", it ends with a rather happy post-rock track like "Ad Infinitum". Even though I could not find any memorable moments, it's really enjoyable listening to as a whole. After this, I still think Torn Beyond Reason is the best they've ever made, while enjoying the new one enough for now.