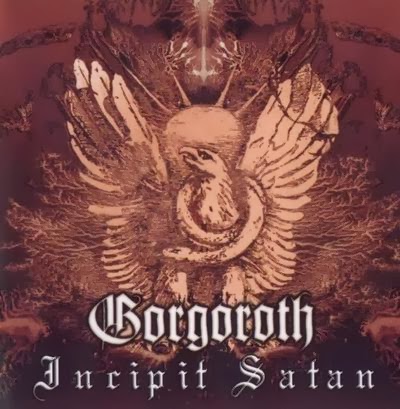 Incipit Satan is one of the most popular Gorgoroth albums and has helped a lot to their worldwide and permanent exposure all these years, as a follow-up of a great legacy and a couple of wrong turns, to be fair. This fifth full length by the band was released at the dawn of the new millenia and it's the first to feature almighty Gaahl as a ful ltime vocalist, as well as the insertion of King ov Hell, or simply King, to the bass. The album is dedicated to Grim, or Erik Brødreskift, (their drummer in Under the Sign of Hell and The Tormentor EP) who had died a year before from drug overdose.

Gorgoroth had shown signs of attraction to the industrial sample noise a bit in their bland album Destroyer, which was released in 1998. One could guess that a logical continuation of the band would be to attach these sounds fully to their music and while they didn't exactly do it, Incipit Satan has the industrial element a little more strongly. The opening, self-titled track has such a part, as well as the second "A World to Win", even though their main body is basically quite grinding. "Will To Power" is fully instrumental and very close to what one would call dark ambient / noise / industrial, having a minimal and sweet feel.

The record features clean vocals by both Infernus and Gaahl. The fifth track "An Excerpt of X" was completely composed by Infernus and he does a certain type of a narrating voice, in a composition where his sorrowful middle-paced style, is naturally dominating. There are well known lines in that track, used as a bridge between the attacking "Unchain my Heart" and the primitive "Ein Eim Av Blod Og Helvetesild". Gaahl sings in clean voice on "Litani til Satan" which and "When Love Rages Wild in My Heart", both of them being very easy listening and almost rock sounded in some moments.

With their second effort in the roster of Nuclear Blast, the band has managed to clean their production into a sterile and acceptable sound, making them even more harmless. Slowly and fully stepping into the mainstream, with Incipit Satan they became the band everyone can deal with, losing their once personal spirit and distinction from the rest of the scene. Even the track titles "Unchain My Heart" and "When Love Rages Wild In My Heart" suggest a soft and naive emotional approach and had me laughing the first time I read them. Still, I believe the crazy piano intro in "Unchain My Heart" and the whole song in general, is a standout for the album.

Musically, it seems like Infernus still has the upper hand in the compositional process over King / Gaahl. I prefer it a lot over Under the Sign of Hell and Destroyer, especially in tracks like "Incipit Satan", which is more than solid. The new characteristics that were introduced by the band did not fully fall to place, even though the outcome generally works fine, maintaining a very basic point of stability. Incipit Satan doesn't deliver the same amount of rawness and hate as the name of Gorgoroth carries, it contains a couple of nice moments but nothing more than that, really. The momentum built by it's intense tracks is counterbalanced and destroyed by it's smoother side.

While I don't consider this record bad, I strongly believe that it is an average offering by the band. Nonetheless, the track "Incipit Satan" has grown to be one of Gorgoroth's trademarks and it depicts the band's style when into the spotlight, including new ideas in such a way that the fans won't possible hate them. I would prefer more ferocity and less romantic poetry from them and I can only stick to two or three tracks off the whole album, the ones I fould cool and memorable. It is by now sure that the brilliance of their first record will never be surpassed.