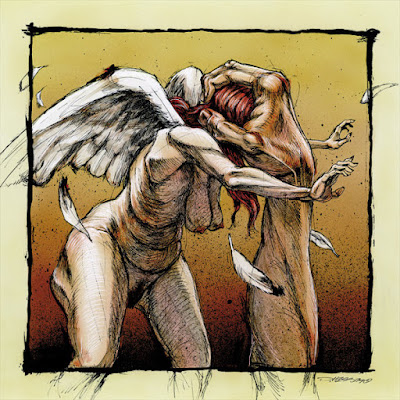 Release date: November 1st, 1999
Genre: Grindcore / Hardcore Punk
Origin: Massachusetts, USA
Label: Relapse Records
Listen: Bandcamp
This is the only split album I have heard from Converge, being alone their hometown gang Agoraphobic Nosebleed, and next in line is “Deeper the Wound”, released in 2001 in collaboration with Japanese hardcore / death metal band Hellchild. Considering the stunningly massive impact Jane Doe has had to extreme sound, it almost naturally comes as a notion to split their history to before and after this release, and this release here stands right before the earthquake but gives away Converge’s talent quite openly. At the same time, I met Agoraphobic Nosebleed with 2009’s Agorapocalypse, as one of the first experiences I had with grindcore, without necessarily being a fan of their earlier, endless song number clocking at 16 minutes, type of albums.
For the time this was released, it hits bull eye on what you would expect to listen. Agoraphobic Nosebleed kick in with a dirty, battered production, speedy tracks of constant unusual tempos, strange short sound effects here and there, they play as heavily as they can and hammer down a semi-distinct, semi-typical grindcore hurricane, with socially aware lyrics and nice samples. Some songs seem to have a bit different guitar sound than others, but in general what you have a frantic and uncomfortable set of cacophonies that makes up a fairly enjoyable listen. I can say I prefer this to the full lengths they were releasing at the time even though I’ve not been through everything, what Agoraphobic Nosebleed manage is to fire up some entertaining grindcore, with a slight personal touch and the sound to come with it.
What is highly more interesting is the Converge side, where the band is jumping off the roof with six amazing tracks that round up almost all the ideas in their arsenal back then. Musicianship shines through the harsh sound, and brings up a lot of powerful melodies you didn’t even know existed, more often than not Converge have me thinking “how did he even think of this riff?”… While not their biggest fan, in The Poacher Diaries the band manages to display its highly skilled technical play, with middle paced emotional tracks, as well as scourging vocals, both clean and growling, in a rather addictive pack of attacking tracks. Again, beautiful samples used in various moments, but this time they are not what makes the tracks special.
It starts of with two bulldozer heavy, fast tracks, “Locust Reign” and “This is Mine”. They feature the most intense side of Converge, at its fastest with intense riffing and unbelievably effective breakdowns, a long time before the technique would be adopted by deathcore butter bands and used as basis in their songs. These two tunes introduce an assault that will have you off your chair, and then the band moves on to even more daring directions. As the compositions get longer, there is more space for their one-of-a-kind writing style, as the psychedelic, clean guitar part of “They Stretch for Miles” starts, with clean vocals that vaguely remind of distorted alternative rock / shoegazing, but much heavier, indicating the first hints of the grooves the band would play later on and become worldwide famous.
Converge mix their faster playing with even slower parts, and it worked naturally. Points need to be given on how good the vocals sound in this release, but the praise in that section is unnecessary, yet the magnificence of the doom / sludgy introduction of “My Great Devastator” is the stamp of proof that Jacob Bannon is a beast. All the different sections of this track are top-notch, as is “The Human Shield”, with Converge clearly flirting with mathcore and unusual musical ideas in their tracks. Filthy, tasty riffs await to be found in the album’s outro “Minnesota” as well and as a whole, The Poacher Diaries has all you need to love this band.
I spoke much more for one of the two sides in this split album, which shows which band I liked the most but the difference is really that big. Converge saves this otherwise simply nice work that would be listened once and lost forever, but in order not to disregard Agoraphobic Nosebleed’s side, get your hands on this if you like grindcore because it is worth it. It’s always nice to discover such gems in band’s side releases, when most of the attention falls on the artists’ full lengths.
Agoraphobic Nosebleed:
1. Mantis
2. Center of the Hive
3. Glass Tornado
4. Landfills of Extinct Possibility
5. Pentagram Constellation
6. Bed of Flies
7. Destroyed
8. Gringo
9. Infected Womb
Converge:
10. Locust Reign
11. This Is Mine
12. They Stretch for Miles
13. My Great Devastator
14. The Human Shield
15. Minnesota
Damage: 3.5/5 [Great]
Labels: 1999 Agoraphobic Nosebleed Converge Grindcore Hardcore Punk USA