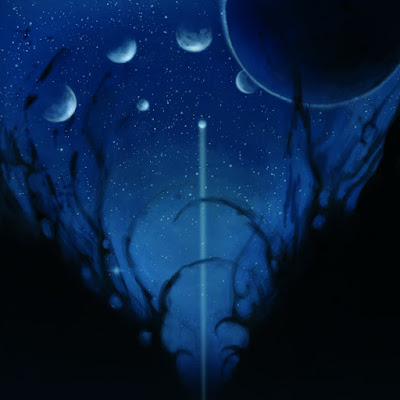 Release date: 2012
Genre: Ambient Black Metal
Origin: Greece
Label: Stellar Auditorium Productions
Listen: Bandcamp
And here is where Spectral Lore followed through. As if Ayloss was fully aware of the weaknesses of his previous works, a five year window is taken to fully fix and re-engineer the band’s sound into a new form that exposed the music for what it can truly be: perplexing, potent black metal with interesting lyrics and more distinct, spacey ambient oriented synths. One can tell how much inspiration must have been employed for Sentinel, which at the time was completely discernible from Spectral Lore’s previous albums, yet more of what we know them to be about today. Similarities to Mare Cognitum start to arise at this time as well, let alone the collaborations that followed, in the music as well as the stellar cover art.
The first two songs are everything you need. Well, and the last one. As some have described it as the milder side of the album, “Atlus (A World Within a World” in its thirty minutes of length, has impressively deep layered synths, a truly monster space ambient track that defined the project at the time and still is well ingrained in its name. While the staggering riffs in “All Devouring Earth”, and especially “The Dejection of Arjuna”, are always at the spotlight of Sentinel, it’s not just that which has been perfected in the album. The touching compositions bloom as the well-thought and structured guitar lines unravel, demonstrating how unique Spectral Lore is. One can find hints of French black metal, US atmospheric black metal, even – and very very slightly – traditional greek melodies, beautiful soloing, fine keyboard work and the production that a record as Sentinel would deserve.
In its own world, the conceptual follower would only come nine years later with Ετερόφωτος, as Sentinel has a very interesting story to tell with its lyrics. Comfortably between intensity and ambiance, it has a lot of characteristic and memorable sequences where Spectral Lore properly channel inspiration into the creative process. It’s almost impossible not to be amazed with the blistering tempos and riffs of “The Coming of Age”, or the melodies of “My Ascension into the Celestial Spheres” and how it gives way to the great outro. Most of Spectral Lore’s audience was obtained through this release, and how the band would soon get into the collective of atmospheric, space-related black metal bands with a clean, melodic sound (Mare Cognitum, Midnight Odyssey etc…).
“Quest for the Supramental” is the only track I can’t seem to enjoy that much from Sentinel. While it has a few interesting guitar lines, it feels like its pending for too long and never arrives to a conclusion, at least not in the bombastic manner that it happens in other tracks. I would really appreciate the guitar work here in a different kind of release but just for me, this song doesn’t click that much with the flow of the rest of the album. A small price to pay for so many other great moments, Spectral Lore’s discography from then on reached the ears of the mainstream metal scene, and well deserved.
I wrote a little piece for the band's next album, and their most popular, III, back when it was released. This leaves us a with a few split releases, some singles and of course the latest full length, to have an overview of Spectral Lore. When the time comes.
Tracklist:
1. All Devouring Earth
2. The Dejection of Arjuna
3. The Coming of Age
4. Quest for the Supramental
5. My Ascension into the Celestial Spheres
6. Atlus (A World Within a World)
Damage: 3.5/5 [Great]
Labels: 2012 Ambient Black Metal Atmospheric Black Metal Black Metal Greece Spectral Lore