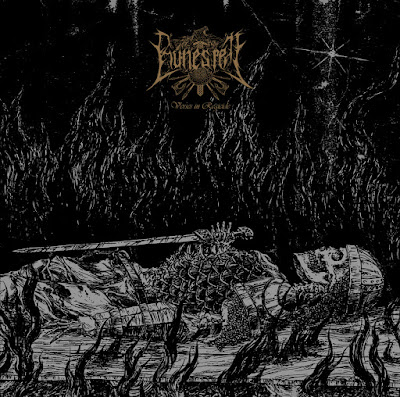 Release date: September 10th, 2021
Genre: Atmospheric Black Metal
Origin: Australia
Label: Iron Bonehead Productions
Listen: Bandcamp
On an already great trajectory, with three well-catered records before this, Runespell established themselves rather quickly in 2017 with their debut Unhallowed Blood Oath and just kept on going on the same pace. Having followed this project from the beginning, I found myself always enjoying their material, which was sometimes unfortunately buried under needlessly unclear production that didn't always serve the songs. One of the reasons I still go back to some of their older works is because the credibility of the music and the epic / atmospheric proportions it's able to reach.
Thankfully, this miscue was completely overcome with the new album Verses in Regicide, which seems to have taken its sound outcome rather seriously. It is finally possible to experience Runespell at its full magnitude, with an adequate production of clear enough instruments, space and a tremendous atmosphere that's offering higher levels of admiration that can be met by just a few black metal bands, who practice this kind of epicness in their music. Wondrous melodies are a pivotal part of Verses in Regicide, from melancholic to heavier and faster parts, behind echoing deep vocals and section changes in the tracks that are absolutely wonderful, as Runespell often take just the right amount of time to build the following lines in these compositions. The record also stands out textually and aesthetically, as one would expect judging from the quality found in track titles / artworks of their previous offerings.
A big leap forward has been achieved, which streams through the record's production but also from the songs themselves. Runespell don't stray from the path they have set, they just excel on it with every new release and Verses in Regicide is no different. It's a record that starts with a blast, the brilliant "Structures of Collapse", and is packed with memorable, emotional and powerful moments of epic proportions. I recognized several influences from the Greek black metal scene and especially the modern works of Macabre Omen, as common lines can be drawn between Verses in Regicide and the absolute masterpiece that is Gods of War, At War. The listeners aware of this release should already clear out their schedule and give this record its time, because at various moments of listening to it I was almost equally overwhelmed and satisfied.
There's two instrumental pieces in the record, "Into Dust" and the outro "Windswept Burial", and you should not skip them. The majestic sound is emphasized even more through the chords of the acoustic guitars and they work perfectly as the bridges between the rest of the album. Tracks "Vengeance Reign" and "Realm of Fire" feature top-notch and unique atmospheric black metal, with the latter including the few moments that Runespell increase the groove and the aggression. The longest track in Verses in Regicide, "Tides of Slidhr", clocks up to nine minutes, combines middle paced tempos with marvelous riffs and at times faster guitar lines just to demonstrate how naturally this flow is achieved from the band. It definitely grows more the more you listen to it.
Verses in Regicide could prove to be one of my favorite releases of the year and it comes from a band that had discreetly shown what it can do, but only now unleashes its full power. More attention on Runespell and this album will give it the justice it deserves, as a well-worked, well-thought and complete release that it is. With an improved sound and potent tracks, all that's needed for a monumental black metal creation is here and it's only waiting for the scene to discover it. I'm really glad I followed this band from the beginning just a few years ago and noticed this evolution first hand.
Track listing:
1. Structures of Collapse
2. Vengeance Reign
3. Realm of Fire
4. Into Dust
5. Tides of Slidhr
6. Shadow's Dominion
7. Windswept Burial
Damage: 4/5 [Excellent]
Labels: 2021 Atmospheric Black Metal Australia Black Metal Runespell