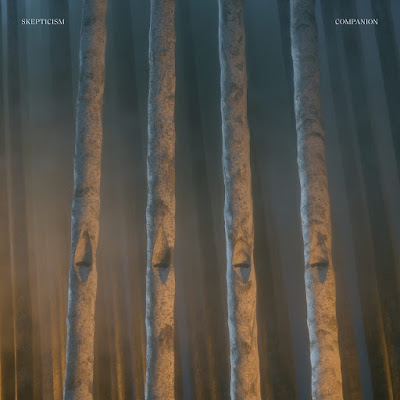 Release date: September 24th, 2021
Genre: Funeral Doom Metal
Origin: Finland
Label: Svart Records
Listen: Bandcamp
We got a tiny bit of Eero Pöyry action earlier this year with his keyboard contribution to the introduction and outro of Mork's latest album Katedralen, a great work of modern Norwegian black metal that features some of the band's most well-written material to date. As for me, I enjoyed Katedralen but was more anxiously waiting for the next Skepticism full length, especially after the slight letdown of 2015's Ordeal, where the band didn't manage to keep my attention almost at all. Prior to that, they have massive albums on their backs, each one a big chapter in their story dating back to the early days of establishing this subgenre.
If you want some quick insight to stop reading this text faster, you should already know then that Companion is startling. Its massive atmosphere, through multilayered synths and the beloved church organs, the snail-paced guitar lines -even though, this time Skepticism dare to play a bit faster too- all live up to their names. With instances that reminded me a bit of the Farmakon era, it's packed with epic moments and almost no dull moment, it naturally flows and you won't even know when the 48 minutes of duration have passed when listening to this magical journey. Companion changes mood from time to time, based always on interesting ideas and fine musicianship, so don't expect pointless, endless songs that attempt to mimic funeral doom metal. I really liked some of the directions this record took, and it's after all, made by veterans.
The album openers "Calla" and "The Interwined" are wonderful examples of Skepticism class, and they stand on the slightly more uplifting side of the album. The band picks up some speed here and might catch some listeners off guard (just compare this to the standard speeds of e.g., Alloy), offering an abundance of beautiful melodies and some especially nice piano + drums part in "The Interwined". Slower, church organ driven lines follow in "The March of the Four", where one can find some of the more typical funeral doom elements being clearer. However, Companion takes a wondrous turn from then on, as it shows its angry face with "Passage". Apart from the intimidating introduction, which feels like a more furious, fast paced black metal track might kick in, its used of background synths, along the mellower, more common Skepticism style, provides a heavier, more punishing result that made it possibly my favorite track in the record.
It's pointless to mention how good the keyboards and the church organ is every time it deserves a mention in Companion, but for the people who are familiar with Skepticism, the quality of Eero Pöyry's execution is well known. That's what I enjoyed the most in the dolent "The Inevitable", and the rest of the instrumentation in the ominous introduction of the final track "The Swan and the Raven", as well as how it built up and closed the album in the same manner. Yet, not to totally praise this release, what I did not completely enjoy at several times was the growling of the vocals, as to me it didn't sound as hefty, as deep or as strong as it could have been, which had me thinking that if Companion featured a more monstrous lower vocal work, it would have been among my top funeral doom metal albums. Still, I doubt this will alienate the fans out there, as Skepticism have made another really solid effort.
Ok, this was really nice, now back to Stormcrowfleet again.
Tracklist:
1. Calla
2. The Intertwined
3. The March of the Four
4. Passage
5. The Inevitable
6. The Swan and the Raven
Damage: 3.5/5 [Great]
Labels: 2021 Doom Metal Finland Funeral Doom Metal Skepticism