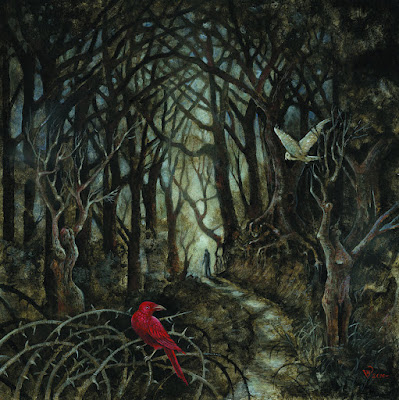 Release date: 2007
Genre: Black Metal / Dark Ambient
Origin: Greece
Label: Self-released
Listen: Bandcamp
A couple of points right off the bat, is that both the original and reissue covers look more beautiful than their respective predecessors of Spectral Lore’s debut album, I. A year later, II came out and it introduced itself (at all times, intrinsically rather close to the previous work) with a ducky acoustic guitar introduction and then a humongous, 24 minute long piece “The Thorns That Guide My Warpath”. At a first rapid listen, I didn’t know what kind of noisy sounds were jamming in its beginning aggressive part, which then turned out to be the drums, and that says a lot about the production of II, a record that sees Spectral Lore significantly putting their stuff together compared to the debut, yet aches from its burying sound. A lot of little gems to discover exist around in II, from emotional clean guitar melodies to more spacey ambient (a foreseeing of the chaos), but above all, more concentrated and adequate black metal.
There’s numerous intriguing lines in that first track alone, which could go for a separate little review on its own as it has the length of an average EP today, and even more than that. Vivid and playful acoustic in between more attacking grimness for the first nine minutes, post / atmospheric black metal drenched in soft pads for a while before the distortion returns, where Ayloss goes towards more epic guitar patterns of Spectral Lore’s own melodic repertoire. Harsh and serene intersect and swap with beautiful choreography, which makes this a piece that fully demonstrates Spectral Lore’s hunger for fully musical compositions with much more complexity and payload than the average metal track. Again, a proper production could do this much more justice than what it actually got, but by now the star had already started taking form and shining. A pattern starts to emerge: heavy melodies, taped with rich dark / space ambiance. Repetitive lines that go almost towards depressive black metal. Keyboard parts that a new listener would label today as “dungeon synth” inspired.
That’s what I am thinking while listening to “Towards the Great Crossroad”, “Recoiling Beneath the Waves” and “To Wither in Silence and Dismay”. Ayloss throws all his arrows at once with these pieces, in an album that sounds more confident and ambitious than its older sibling, but out of the same elements. Spectral Lore were never a typical black metal band, and II contains many more different branches than its raw sound suggests. There is less noise experimentation in II, and more layering, clearer ambient, clear even from the dreamy outro “Where Nature Won’t Ever Yield to Man”. The shortest track “Leaving the Stars Behind”, only three minutes long, could very easily be absorbed in a longer composition as part of it, but probably it has a separate meaning. The production baffles me the more I listen to it though, as guitars / guitar-like sounds, and different instruments, sound different at different points in the album, or at different volumes.
Honestly, II is also another record I don’t go back to easily. It still seemed to me that with its abundance of ideas, it is not as concise as the circumstances demand, and the wall of sound is just another barrier. Nevertheless, noticeable steps forward were taken in just one year, the album – apart from my personal liking – has a bunch of neat moments for you to enjoy, if you like Spectral Lore and not under the umbrella of their later clearer sound. For me, from Sentinel and on is where the real magic happens, and where new levels are unlocked and achieved dominantly from Ayloss. Before 2012, what’s left for me is the history and its turns to acknowledge.
Tracklist:
1. Introitus
2. The Thorns That Guide My Warpath
3. Towards the Great Crossroad
4. Leaving the Stars Far Behind
5. The Drone's Journey, Recoiling Beneath the Waves
6. Through an Infinite Dreamscape
7. To Wither in Silence and Dismay
8. Where Nature Will Not Ever Yield to Man
Damage: 3/5 [Good]
Labels: 2007 Ambient Black Metal Atmospheric Black Metal Greece Spectral Lore