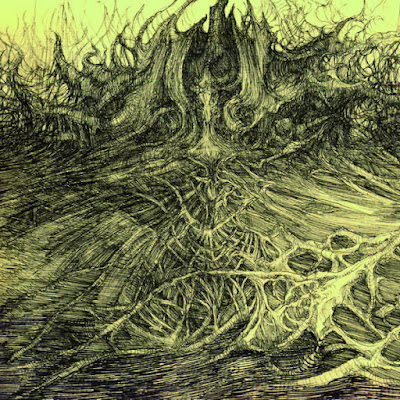 Spectral Lore’s debut full length is very much not like material that followed later, and as this act has made itself famous with its massive and unique black metal sound today, back in 2006 things had not settled in terms of music or direction. I, was originally released in cassette, going along with poor production and primitive sound which, while already showing its compositional adventurous character, did not step that far away from the norm. Ayloss used hefty amounts of dark ambient, which also experimented more than just creating endless dusty pads, for example in the tracks “The Drowning” and “The Descent”. Unconventional noise-like compositions were also practiced not only in the introductory piece “Layers of Conception” (what a way to open an album”, but also in “Sigma Receptor”, having a sound equal to all the as-noisy-as-possible raw black metal bands of the underground today.

Unfortunately, the tracks in I are simply underwhelming in terms of ideas. While Spectral Lore presents lengthy tunes, for which it would later become famous, they are the weakest in this album, as it can be heard from the relatively boring guitar parts and transitions of the 13 minute long “Echoes of a Long Dead and Forgotten Place”. A lot of different ideas come into the game, indicating a clearly restless composer (no need to praise Ayloss even more), but the pieces have not be placed smoothly together in this puzzle. I feels more about him playing around until things click, and things clicked a bit later in Spectral Lore’s discography. The outro “Exodus” sounds completely out of place compared to the rest of the record, and “The Cleansing Rain/Morningrise in the Eternal Fields” overuses its natural samples, before an average middle to end part. Sounds come and go too quickly and nothing remains.

As a band that has achieved stellar levels of greatness since then, Spectral Lore’s early material are definitely worth a listen and should be part of the fans’ collections. This debut however comes off quite disoriented, with a noisy sound that is not helpful and very sparse good moments, if any. I appreciate the creativity that underwent this release, yet at this stage it wasn’t fruitful. I have returned several times to I, but the album has never managed to keep my attention except for only a handful of moments where it’s just interesting to hear the noise. Other than that, some more attention was brought to the record when it was re-released in 2015 on vinyl, with a beautiful cover art (the one shown above).

1. Layers of Conception
2. The Drowning
3. Echoes of a Long Dead and Forgotten Place
4. The Descent
5. Sigma Receptor
6. The Cleansing Rain / Morningrise in the Eternal Fields
7. Exodus